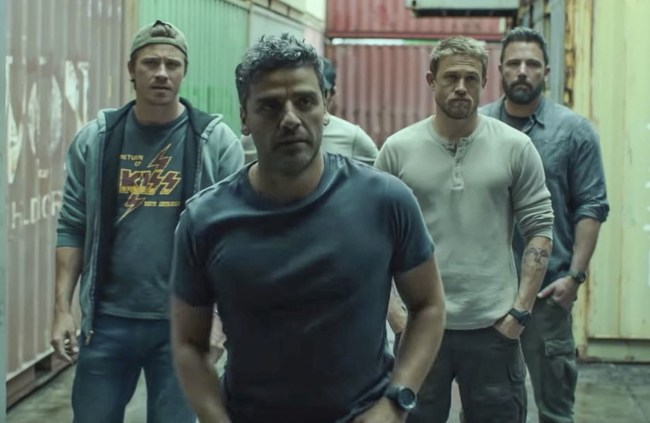 Here is the synopsis of Triple Frontier from Netflix:

Five former Special Forces operatives reunite to plan a heist in a sparsely populated multi-border zone of South America. For the first time in their prestigious careers these unsung heroes undertake this dangerous mission for self instead of country. But when events take an unexpected turn and threaten to spiral out of control, their skills, their loyalties and their morals are pushed to a breaking point in an epic battle for survival.

“You’ve been shot five times for your country, and you can’t even afford to send your kids to college,” says Ben Affleck’s character Tom ‘Redfly’ Davis. “If we’d accomplished half the things that we’ve accomplished in any other profession, we’d be set for life.” “Three frontiers” is the term for the area in South America where Paraguay, Argentina, and Brazil meet.

Netflix went for a star-studded cast for their upcoming film that stars Ben Affleck, Oscar Isaac, Charlie Hunnam, Pedro Pascal, and Garrett Hedlund. Triple Frontier is directing by J.C. Chandor, best known for A Most Violent Year, All Is Lost, and Margin Call.

Years ago, this heist drug cartel movie was originally a Paramount movie starring Channing Tatum and Tom Hardy, but those actors dropped out. Since then there have been rumors that other A-list actors would rob a cartel including Tom Hanks, Will Smith, Johnny Depp, Mahershala Ali, and Casey Affleck.

Triple Frontier will be on Netflix for your bingeing pleasure and will appear in select theaters in March of 2019.