Truck Gets Sideswiped, Bursts Into Flames And Almost Falls Off A Bridge Like Something Out Of An Action Movie 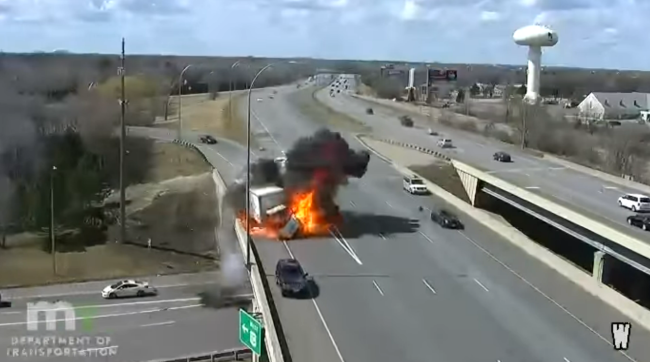 The driver of a box truck survived one of the wildest car crashes ever caught on video on Monday.

Truck driver Mitchell Moore was just minding his own business tooling down Highway 10 as it crossed Highway 65 near Spring Lake Park, Minnesota when a car entering the highway from the on-ramp plowed right into him.

“Actually it came so quick I really didn’t have time to react. All I saw was rocks and dirt,” Moore told KSTP News. “The next thing I know I’m getting hit and I’m getting pushed over another lane.”

In the video, after the car smashed into Moore’s truck it becomes apparent that he has no control over his truck and is headed straight for the bridge wall.

“It actually broke the front wheels off the truck, and it stayed on the truck long enough for me to impact on the bridge,” Moore said. “I figured if I went over the bridge that would have been the end of it.”

Moore’s box truck immediately caught fire when it hit the concrete wall, but it wasn’t until he escaped out the passenger side door that the blaze really went out of control.

“They were coming up on the driver’s side first and then I was going to try and get out that way and realized that wasn’t a good option, so then I just went out the passenger side,” said Moore.

The Minnesota State Patrol reported that the crash resulted in a closure at eastbound Highway 10 and Highway 65 for two hours. Police also stated that the driver of the car, who suffered non-life-threatening injuries, showed suspected signs of impairment and was being processed for driving while impaired, according to Fox 9 News.

Related: Motorcycle Rider About To Go Full Send Over A Drawbridge Bails At The Last Possible Second