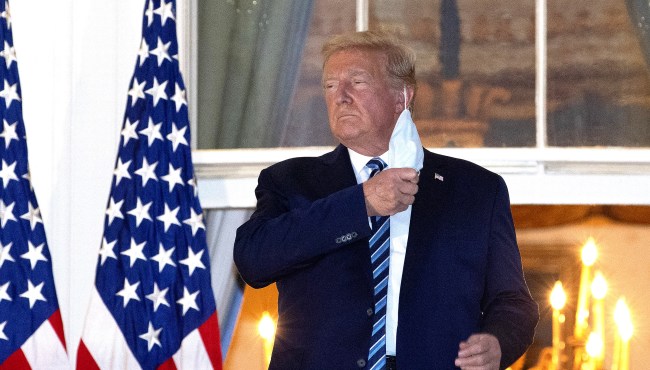 Let’s just say that Americans eventually lose their minds, and, through a series of bizarre events, I somehow get elected President of the United States. My first line of business upon stepping foot inside the White House would be to demand the truth about aliens, the Kennedy assassination, and whether or not there really is a shadow government calling all of the shots. I’d also get to the bottom of lizard people, Bigfoot, and don’t think for a second that I’m going to get down to signing budgets and passing laws without getting one of those bastards from NASA to confess that the moon landing was a hoax. As the leader of the free world, the president is given special access to national secrets that could change the course of everyday life, religion, and hope if they were ever revealed. So, sure, the intelligence community is getting nervous about the possibility of Trump dragging some skeletons out of the American closet.

There is no doubt that President Trump is feeling ripped off by the outcome of the 2020 election. He’s been on Twitter non-stop since President-elect Joe Biden was declared the winner, talking about voter fraud, a rigged election, and, for whatever reason, how Obama spied on his campaign. He’s even got his trusted spiritual advisor, Paula White, out there speaking in tongues trying to get heavenly forces to convince election officials that he actually got more votes than Biden. It’s lunacy. Still, rather than admit defeat and move onto another chapter, it seems the military might have to drag Trump out of the White House kicking and screaming come January. But before anything like that happens, there is some concern that he might get ticked off enough at the situation to go public with deeply classified government secrets.

“Anyone who is disgruntled, dissatisfied or aggrieved is a risk of disclosing classified information, whether as a current or former officeholder. Trump certainly fits that profile,” said former CIA officer David Priess in a recent interview with the Washington Post.

Even if President Trump has been too busy building border walls and dancing like somebody’s uncle to pay too much attention to all of the classified information at his disposal, he will have access to these documents long after being bounced out of Washington D.C. Right now, Trump can legally disclose any secret he wants to the American people without repercussions. He could do a Veteran’s Day press conference to tell the population that all of our military technology was designed by aliens with seven peckers, and nobody could say a thing. The second that Biden takes over, however, revealing those confidential matters in, say, a $100 million book deal would be a violation of the law.

But Trump has until January to bring down the whole scene. Let’s face it, it wouldn’t take very long to destroy centuries of secrecy. And by all accounts, any such action would make President Trump one of the most outstanding leaders to ever grace the Oval Office. After all, We The People deserve to know whether there’s a threat of alien invasion or if astronauts ever landed on the moon. And if lizard people are dwelling in the center of the earth feeding orders to human controls, then, by God, we should know that too! We’ve been lied to long enough, don’t you think? Only we’re probably not going to be enlightened by Jack Crap. He is far too wrapped up in himself and the election to openly show the American people what’s really going on.

“A knowledgeable and informed president with Trump’s personality characteristics, including lack of self-discipline, would be a disaster. The only saving grace here is that he hasn’t been paying attention,” Jack Goldsmith, former head of the Office of Legal Counsel at the Department of Justice under President George W. Bush, told the Post.

But Trump’s stability is in question. Some believe his behavior, especially as of late, is the sign of a desperate man trying to hold onto a victory that he never really had in the first place. What makes his current mindset so dangerous, some security officials say, is that he might be persuaded to cough up super-secret national security details to the highest bidder. We know he needs the money. That could be the Russians, Simon & Schuster, or some private business entity looking for the leg up in a recovering economy. One way or another, intelligence officials are on guard just in case the White House gets loose lips. And if anyone does, well, we’ve seen enough episodes of House of Cards to know that’s not going to end well.