Is This TV-Headed Man Leaving Old TVs On People’s Porches Hilarious Or Terrifying? 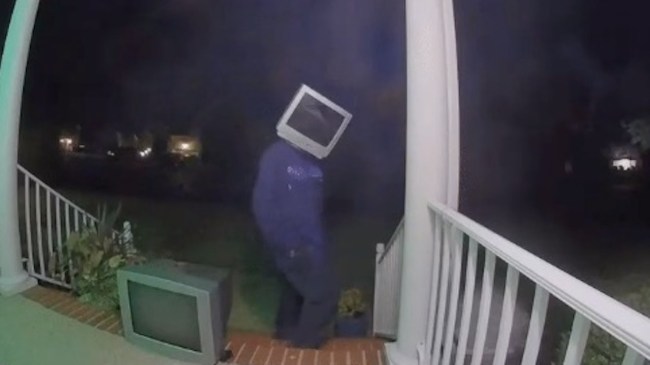 Naturally, the first thing that popped into my head after watching this video is a quote from Gotham City mob boss Carmine Falcone in the 2005 classic Batman Begins. Naturally.

“People from your world have so *much* to lose. Now, you think because your mommy and your daddy got shot, you know about the ugly side of life, but you don’t. You’ve never tasted desperate. You’re, uh, you’re Bruce Wayne, the Prince of Gotham; you’d have to go a thousand miles to meet someone who didn’t know your name. So, don’t-don’t come down here with your anger, trying to prove something to yourself. This is a world you’ll never understand. And you always fear what you don’t understand.”

That’s basically how I feel about ole TV head ass here: I do not remotely comprehend what the hell is happening, and therefore, my initial, and only, reaction is fear.

According to a report from WTVR-TV, an unidentified man in Henrico County, Virginia, has been leaving old-school TVs on the porches of local residents while wearing an old TV on his head to conceal his identity.

In total, more than 50 people woke up to a 15-year old TV on their front porch and have no idea why.

“It’s sort of funny… He wants to be known as the TV Santa Claus, I don’t know. I can’t think of any technology or political point that would be valid here. It’s just a senseless prank,” local resident Jim Brooksbank told WTVR-TV

The Henrico County neighborhood doesn’t seem to share the same fright as me, though, as Lt. Matt Pecka of the Henrico Police Department said that the “meticulously placed” televisions “caused no threat”:

“I evaluated the situation and determined that this was an isolated incident that caused no threat to any individual,” Lt. Matt Pecka told NBC News.

Look, I’m sure it’s just a harmless prank, maybe even some sort of viral marketing stunt, but there’s still something about this that chills my bones. Maybe doorbell camera footage at night is just inherently scary? Or perhaps it’s because it reminds me of that scene from The Purge? Or — most likely — I’ve just become a gigantic pussy in my old age.

Either way, if you live in Virginia, I’d keep an eye out for Mr. TV Dome here, because a dude who roams the streets at night with a home entertainment system around his cranium has to be just a little unstable (quite literally, in fact, as it must be quite hard to walk around with a 30 pound Panasonic attached to your neck).