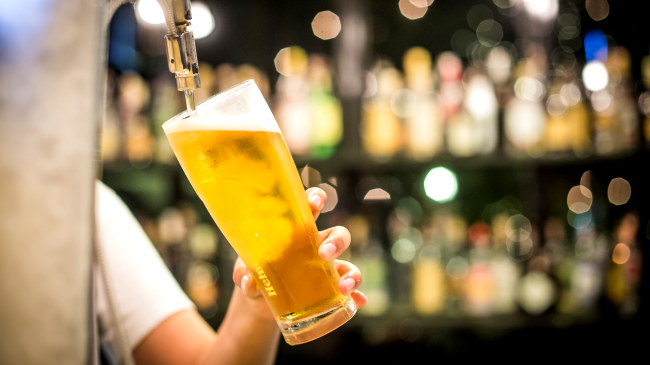 Think the cost of food and beer at sporting events is pretty outlandish? Have you ever been to an airport?

This week, a man’s tweet showing the price of a glass of beer costing $28 at an airport restaurant has gone viral and frequent travelers who run into this sort of thing all the time are fed up.

The man, Cooper Lund, was in LaGuardia Airport waiting for his flight to Minnesota to board. Like many travelers he decided to kill a little time in one of the restaurants inside the airport.

However, when the Brooklyn resident sat down and perused the menu at the LaGuardia Biergarten he was stunned to see how much a glass of beer was going to cost.

The prices for a single glass of beer ranged from $13.05 for a Michelob Ultra at the cheapest, all the way up to $27.85 for a Sam Adams Summer Ale, the most expensive.

Legalized monopoly. Can't bring it through security so once you are on the other side you are at the full mercy of whatever they want to charge and what ever you are willing to pay.
Allegedly there are rules for price gouging in place but since everyone benefits, why investigate?

On top of that, the restaurant was also adding a 10 percent charge for what they referred to on the menu as a “Covid Recovery Fee” to the $28 beer.

Biergarten’s parent company OTG, when they realized how bad a look this was, especially when the story was covered by TODAY, replied to Lund’s tweet that the exorbitant pricing for a glass of Sam Adams was “incorrect.” It should have been just $18.15, according to an email sent to TODAY.

Yikes. GOOD CATCH! That Sam Summer **price is incorrect** and has been updated. + note all other listed prices are for 23oz pours.@cooperlund - we very much appreciate you spotting. DM us next time you're passing through -🍻🍻🍻 on us.

“This is a situation where someone simply input the wrong prices. Once we learned of it, we immediately took action to correct and began proactively auditing our entire system to ensure there were no other mistakes,” OTG wrote.

Apparently the $20.60 price for a glass of New Belgium Fat Tire was correct. So figuring in the 10% Covid Recovery Fee, plus a standard 15% gratuity, that means a total cost of $25.75, plus tax.

It’s such a joke…Here is the “Value Menu” at Newark Airport 😂 $10 for an egg sandwich. $9.10 for a bottle of water. pic.twitter.com/moZVuxJAHz

And while Lund may have gotten the pricing “mistake” fixed, he expressed concern for everyone who came before him and shelled out around $30 for a single glass of beer.

“I appreciate it but it’s kind of too little, too late. How many people paid the outrageous price who didn’t have a tweet get traction to get it fixed?” asked Lund.

On Tuesday, The City reported that the Port authority of New York and New Jersey told OTG to audit its menu prices.

According to Port Authority rules, retailers at Kennedy, LaGuardia and Newark should only be charging 10% more than “street prices.”

“I sucked it up and paid like $11 for a 12 oz. Heineken because I’m kind of a chump who still wanted the novelty of drinking a beer in an airport before noon,” Lund told TODAY.