Tyga Dropped $500,000 On Four Pound White Gold Chain That Will Blind You If You Look Too Long 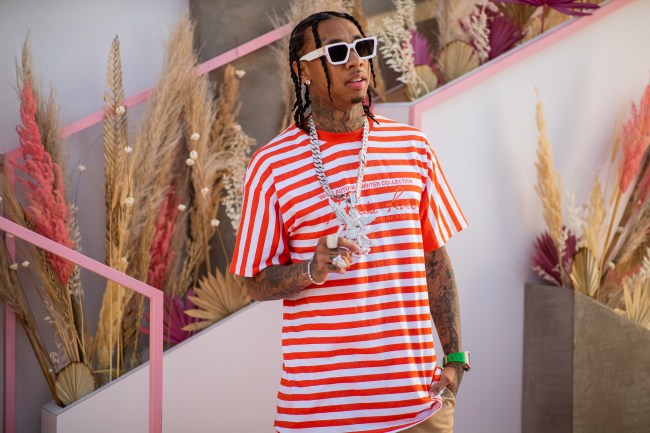 Imagine dropping a half million dollars just to make a statement to your haters, who could either be real or imagined.

Tyga is the latest artist to make a questionably sound financial decision by dropping $500,000 for a four-pound, 18k white gold Archangel chain featuring St. Michael trampling on Satan, an ode to the New Testament.

The chain, which Tyga rocked at Coachella and on the cover of his new single ‘Goddamn,’ was designed by famed celebrity jeweler Ben Baller and IF & Co. Jewelry, who claimed in an Instagram post that Satan getting stomped out is a reference to Tyga’s comeback and triumph over his haters after an impressive return to music as of late.

Hardest piece in the game? 🤔 pic.twitter.com/IcYBYhVMEl

Tyga also copped 10 extra smaller versions of his chain for his crew, which you can see in the third photo below.

The chain is unquestionably dope, but a questionable choice for someone who had his car repossessed for the third time since 2016 for simply not making payments. Oh yeah, and as Page Six points out, the 29-year-old also owes nearly $900K in back taxes after he refused to pay the IRS anything between 2011 and 2016.

Check out some of the insane work he’s done for other celebrities.

And most importantly, an iced out mustard bottle.