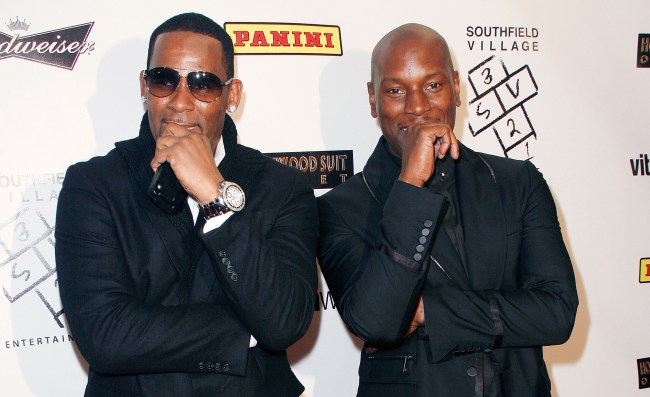 So here we are again, and there’s no Fast & Furious movie coming out so you know what that must mean.

During a recent conversation with Fat Joe, somehow the topic of R. Kelly and his alleged pedophilia and sex crimes came up. Numerous victims of alleged sexual abuse by Kelly when they were minors have come forward, leading to the singer’s arrest. He is currently awaiting trials on 18 federal counts in both Brooklyn, as well as in Chicago, including kidnapping, forced labor, child pornography and obstruction of justice charges.

However, despite all that, Tyrese says we should hold off of casting any judgement with regard to Kelly and making it sounds as if his crimes aren’t as big a deal as they actually are.

“I know he has a lot of controversy and heat on him,” said Tyrese. “I get it. Ain’t no need to get in my comments and if you write some goofy shit I’m going to say ‘it’s okay.’ I’m too real to fake it. I just have to say it. What I’ve learned over the years, there is a lot of people in our industry… Everybody is involved in something that they don’t ever want people to know about publicly. I would say, you know what, let God do his job.

“If I were to find out what everyone is into, we probably wouldn’t be a fan of anybody. There is some people who do what they do, they know how to keep their sh*t completely in the closet.

“When you have drug problems, you are an alcoholic or you got vices that may be inappropriate or whatever the case may be, you’re just trying your best to do whatever it is that you’re doing hoping people don’t find out.”

Far be from me to judge, but child pornography is a far cry from being the same thing as being an alcoholic or doing drugs.

Tyrese then quoted the Bible and added, “Thou shalt not judge.”

Needless to say, Tyrese’s take on R. Kelly didn’t go over very well with many people.

#ICYMI: Tyrese Gibson defended R. Kelly during a conversation with Fat Joe, leading hundreds of his fans to lash out on social media.https://t.co/No3RmWVBSx