Uber Acquires Bike-Share Startup JUMP For Around $200 Million, But Will It Be Worth It? 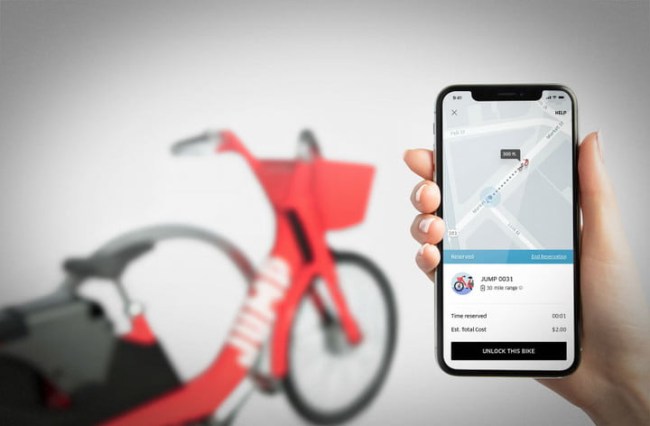 Uber is expanding past their normal ride-sharing service into the bicycle-sharing business. On Monday, Uber announced that they had acquired bike-sharing startup JUMP. The dockless, electric bike-sharing service had partnered with Uber for the past few months in San Francisco. The trial period must have gone swimmingly because Uber purchased JUMP for approximately $200 million.

For $200 million, the ride-hailing company will now have a fleet of 250 ebikes. Uber can now offer battery-powered, pedal-assist bicycles to their customers in addition to cars, which could be quicker in some cases, especially a city that is paralyzed by traffic. JUMP charges customers $2 for 30 minutes to use the ebikes and then a per-minute fee thereafter. App analytics firm Apptopia estimated that JUMP’s app has been downloaded 25,000 times and has roughly 6,000 daily active users. The bikes come with integrated locks to secure the bikes so they don’t get stolen. That seems like a lot of money for 250 ebikes and a customer base of 6,000.

“We see the Uber app as moving from just being about car sharing and car-hailing to really helping the consumer get from A to B int he most affordable, most dependable, most convenient way,” said Uber CEO Dara Khosrowshahi. “And we think e-bikes are just a spectacularly great product.” The pilot program gave Uber users in San Francisco a “bike” option on the app.

“Our hometown pilot is off to a very strong start, with riders enjoying a convenient and environmentally friendly way to cruise up and down our trademark hills,” Khosrowshahi said. “The utilization of the bikes has been higher than expected. People are using these bikes for multiple trips a day.” JUMP will be an independent subsidiary of Uber.

“At Uber, we’re focused on championing smart technology for smart cities,” Khosrowshahi wrote. “But our ultimate goal is one we share with cities around the world: Making it easier to live without owning a personal car. Achieving that goal ultimately means improving urban life by reducing congestion, pollution and the need for parking spaces.”

While it makes sense for Uber to diversify and expand their market capabilities. There is some risk in a bicycle-sharing service. Currently, Uber takes little risk with their ride-sharing service since the drivers are responsible for the purchase and maintenance of the vehicles. With this ebike service, Uber will have to purchase the electric bicycles, maintain the bikes, and replace them if they are stolen. The JUMP acquisition will definitely need more capital and present more risks.

Welcome to the family @JumpMobility! One step closer to our vision of bringing together multiple modes of transportation within the Uber app.