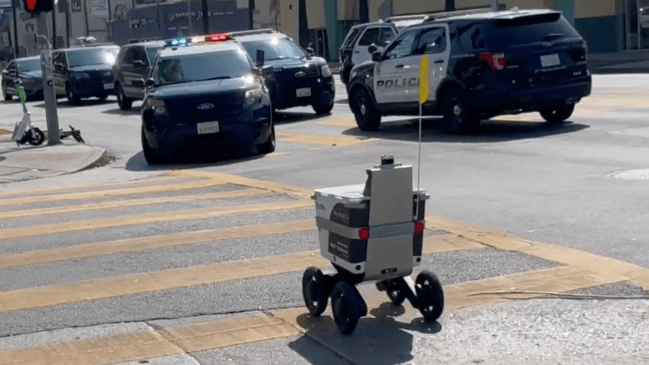 It seems like people have been predicting humanity’s downfall at the hands of the robots it’s responsible for creating since robots became A Thing in the first place, and that reality seems like it’s becoming increasingly plausible with every day that passes (regardless of what some robots would like you to believe about the possibility).

We may not currently live in a world filled with flying cars, jetpacks, and plenty of other technological advancements at the center of many unrealized visions of the future, but the world has become increasingly reliant on automation and the artificial intelligence that has provided us with a few glimpse at a potentially dystopian future.

A lot of robotics companies have a tendency to paraphrase Super Troopers when it comes to assuaging fears about an uprising with cutesy videos that basically say, “The shenanigans of our increasingly sentient beings are cheeky and fun, not tragic and cruel”—a message that’s hard to buy into when you watch a clip of a robot dog with a machine gun on its back that’s straight out of Black Mirror.

Now, we have our latest example of Robots Got Wild courtesy of a video that surfaced out of Los Angeles earlier this week.

A food delivery robot was filmed invading an active crime scene in L.A.

On Tuesday, Film The Police LA shared a fairly surreal video of a robot tasked with dropping off Uber Eats orders seemingly refusing to let the police tape that was used to cordon off Hollywood High School following a school shooting hoax stop it from doing its job.

Gizmodo chatted with Serve Robotics to get some more information about what transpired, and a spokesperson for the company tasked with manufacturing and monitoring the delivery vehicles (which have the ability to operate autonomously) placed the blame on an unnamed supervisor who failed to reroute the motorized courier, saying:

“Serve’s standard operating procedure is to reroute and not cross barrier tapes; however in this instance the robot supervisor believed they were being waved through. We’re taking steps to ensure our operating procedures are followed in the future.

While Serve robots are capable of operating autonomously in most circumstances, they are assigned to human supervisors to ensure their safe operation. This incident was the result of human error in navigating a blockage.”