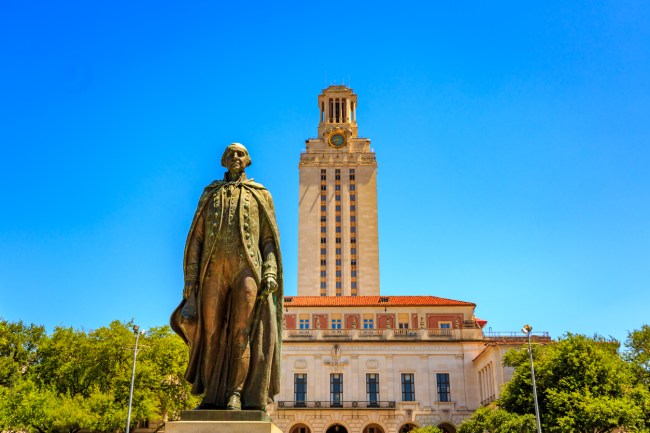 Tensions are boiling at the University of Texas at Austin. Dozen of student tour guides are on strike this week over an ongoing dispute about the school’s song “The Eyes of Texas,” particularly a plaque with its lyrics in the Admissions Welcome Center. This is the latest development in a nearly yearlong controversy that has pit many administrators and alumni against a large group of students and members of the Longhorn community.

“The Eyes of Texas” is traditionally sung at school events, most notably after each football game. There are a lot of theories as to its origin, but the most common understanding is that its first performance came at a minstrel show, where performers wore blackface. As a result of the song’s roots, amidst the important, ongoing conversation about race in the United States, Texas football players refused to stay on the field for its performance last season. That decision caused a stir amongst certain donors and parts of the alumni base, amplifying the discussion to a national stage. It has been an expansive back-and-forth between those who believe the song is an important tradition and those who believe it is time to retire “The Eyes of Texas” entirely for almost 12 months.

A committee that was created by the university found that it was not written with racist intent. However, it acknowledged that its first public performance likely came in blackface. Since then, a vocal group of student employees have been at the forefront of trying to drive change at the school.

Earlier this year, university admissions renamed the tour guide group. Previously called “the Guides of Texas,” similar to “The Eyes of Texas,” the office chose to separate itself from the name last July. Members of the group sent a letter to the university on April 19, 2021 and asked for a plan that detailed the plaque’s removal by May 1st— otherwise they would stop giving tours in-person or virtually.

The admissions office replied via email on April 29 and would not commit to removing the plaque, telling the students that they did have to work as a tour guide if they had concerns. Basically, if you don’t like it, quit.

“We understand you may no longer desire to serve in this role based on your feelings about the University’s long-standing school song. If you no longer wish to serve as a Texas Tour Guide, please inform your supervisor so that your request can be processed,” wrote Miguel Wasielewski, director of admissions.

Well, the guides stuck to their word and roughly 55 employees are on strike. It also comes as a statement against the university’s recent announcement that members of the esteemed Longhorn marching band are required to play the song.

As students are refusing to show up to work, the dialogue across campus continues. In another sign of escalating tension between the two sides, a recent student-organized Zoom lecture turned frightening last week.

The Thursday lecture about “The Eyes of Texas” was led by Alberto Martinez. Martinez is a history professor siding against the song, saying that his research shows racist origins, despite what the university committee found earlier this year. During the online discussion group, a masked man loaded and brandished a gun in view of some of the participants.

He was wearing a beanie, with a bandana covering most of his face, only showing his eyes, and held a loaded firearm with both hands in front of his chest. The event was livestreamed on Facebook and open to the public, so there was not an opportunity to vet participants, and the armed man joined the call.

Martinez alerted university police and they are investigating the incident.

This is particularly terrifying because it comes after wealthy alumni threatened to pull their donations to the university if the song was replaced. In addition, a football player who opposed the song tweeted in March that he received death threats over his position.

As things continue to escalate around “The Eyes of Texas,” University of Texas president Jay Hartzell has repeatedly stated that the song is here to stay.