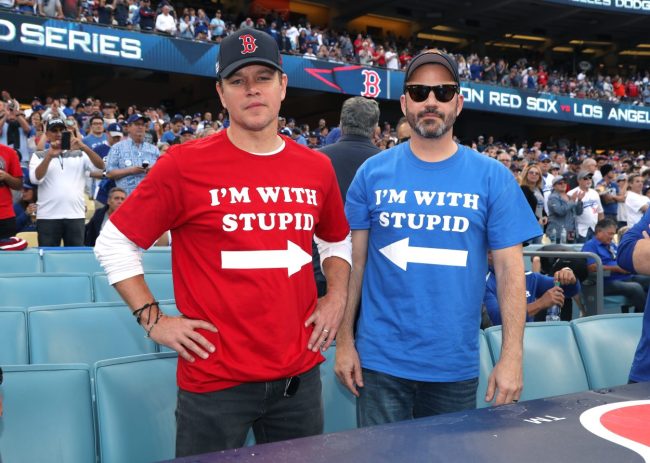 Jimmy Kimmel’s inaugural LA Bowl was a tremendous success, but Matt Damon might not agree. The urinals at SoFi Stadium featured a picture of Damon, so when people went to urinate, they did so on his face.

The urinals at the Jimmy Kimmel LA Bowl appropriately have Matt Damon’s face on them pic.twitter.com/uLwBQGDHYo

The urinal cake photo is a continuation of a long-standing beef between Kimmel and Damon that has stretched more than 15 years. It is more of a fake feud at this point and it has since evolved into a real friendship.

Kimmel started the rivalry nearly two decades ago. Almost every night, at the end of his show, he jokes that Damon’s guest appearance on the show was bumped. He says something along the lines of “apologies to Matt Damon, but we ran out of time.”

However, there was no guest appearance and Damon didn’t even know Kimmel when the joke first began.

“People started to call me and ask like, ‘Hey, what’s your connection to this guy?’ And I’d never met Jimmy. He literally pulled my name out of thin air one night.”

“And the way he told me this story, he said he had like a, he said ‘I had a ventriloquist and a guy in a gorilla suit as my guests. And I just said kind of as a throw away, my apologies to Matt Damon when we ran out of time,’ but he could have said Brad Pitt,” Damon said.

“He could’ve said, you know, George [Clooney] ― he could have said somebody else. But he just, for some reason, maybe I had a movie out that week or something, but he just said my name,” the star added. “And it changed the course of both of our lives. We’ve kept this a feud going for, you know, it’s gotta be 15 years now. I’ve had a lot of fun doing it.”

Kimmel explained things from his perspective on NPR in 2013:

He says that it was random and that it simply made his producer laugh.

“I decided to say, for the amusement of one of our producers who was standing next to me, ‘I want to apologize to Matt Damon. We ran out of time. And he got a kick out of it ― the producer ― so I just started doing it every night to amuse him.”

“Matt Damon was just the first name that popped into my head,” the comedian said. “I was trying to think of an A-list star, and somebody we absolutely would not bump if he was on the show.”

“The legs on this bit are unbelievable to me. I mean, people laugh every time I say it. Repeating the same joke every single night, you’d think eventually people would get tired of it, but they don’t.”

Now, almost 20 years later, the joke was escalated by the LA Bowl’s urinals.

Every time that a fan went to use the bathroom at SoFi Stadium, he was forced to pee on Damon’s face. Brutal, but hilarious.

Between the urinals, the “world’s most powerful t-shirt cannon,” and the puking camel mascot, the LA Bowl was a success.