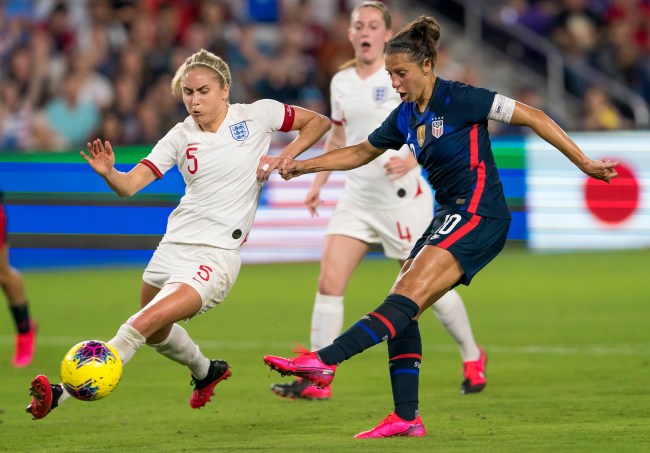 What is skill? That’s a strange, vague word to use. Are we talking footskills? Are strength and speed skills? Passing, vision, scoring? If we lined up the women and the men and had them run through an obstacle course, like the NBA skillz challenge, would we have an answer? Because that test of fundamentals is so boring that the players don’t even try.

BUT, if skill is measured in dominance over opponents, the women’s team is far more skilled than the men’s.

Embroiled in a lawsuit over equal pay, lawyers for the US Women’s National Team (USWNT) employer argued in a court filing Monday that women athletes are less skilled and work less demanding jobs than their male counterparts.

Court documents filed in the equal pay trial, which captivated the country last summer after the USWNT won its fourth World Cup title in France, show US Soccer lawyers arguing that, under the Equal Pay Act, “The job of a [men’s national team player] carries more responsibility within US Soccer than the job of a [women’s national team] player.”

US Soccer also pointed to biological differences and “indisputable science” to argue that women should be paid less because the men’s team “requires a higher level of skill” than the women’s team.

Look, obviously if the men played the women, the men would win. But that seems completely irrelevant to this debate. Who fucking cares? I had way more fun watching the women play in their world cup than I had watching the men play in… 2014? It’s pretty safe to say that America is far more proud of its women’s soccer team than of its men’s.

As it turns out, the women’s team generated more revenue than the men’s since they won the 2015 World Cup. Morons have pointed out that that happened because the men didn’t qualify for their own world cup during that time. Correct! You don’t get paid when you don’t qualify for your fucking job! If you and your girlfriend go to the same law school, and then she passes the bar but you don’t, and she then goes on to make more money as a lawyer than you? Don’t point to your failure as a reason for why she generated more money. I feel like I’m taking crazy pills.

Yahoo Finance breaks it down in this article. Most of it seems pretty fair, but there are a few points that don’t seem to hold water. For example, the women earn less from the World Cup than the men. This is because the prize pool for the men is much, much higher ($400 million vs. $30 million). Teams are paid out sums based on where they finish in the tournament. The article makes the point that, “In 2015, the USWNT prize purse was just $2 million. In 2014, the USMNT divvied up $9 million after exiting in the Round of 16.”

As lopsided as those prizes are, I don’t know that we can necessarily blame U.S. soccer for that. The men’s world cup simply has way more money to dole out, because other countries around the world care a lot more about men’s soccer. The men’s tournament makes more money, so they can pay their teams higher prizes. The issue of a wage gap between the men’s and women’s teams is definitely a problem, but it’s one that should be solved at home and with relation to the money generated by the two teams here in America.

Here’s a simple solution: take the sum earnings from the men and the women, lump that shit into one big pot, cut it right down the middle, and divvy it out equally. If this makes the men mad, terrific—maybe it will incentivize them to work harder so that they can make more money, you know, by qualifying for the World Cup? The way the women always do? Wouldn’t be the worst thing.