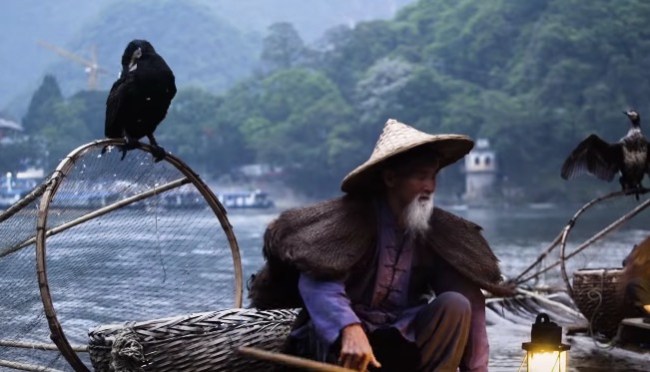 Over the years, every fisherman’s used some sort of crazy bait to catch a fish at some point. I’ve got some friends who hold a ‘gummy’ tournament every year where the fishermen can only use candy gummies as bait. They have the option to use the Gulp! fish attractant on those gummies but in order to do so, they have to take a shot of the stuff which is absolutely horrendous. I’ve caught bluegill using fried chicken skin, and other fish using the tab from a Coke can as a shiny attractant.

Fish will respond to the craziest baits, but I’ve never thought to train a cormorant bird to do all of the heavy lifting for me. Who knew that fishing using live birds was an ancient tradition dating back centuries in China? Not me, not until I watched this short clip below from Great Big Story. These brothers fish the postcard-perfect Lijiang River in China using trained cormorant birds by sending the birds out into the river to catch fish for them and later splitting their catch with the birds, and they’ve got a trick for making sure the birds don’t swallow the larger fish on the way back in:

Do you have any awesome fishing news, videos, or stories to share? Check me out on Twitter at @casspa.

I’m kind of shocked that this isn’t a more common style of fishing amongst villagers worldwide. There are cormorant birds everywhere you go. If you’re out fishing they somehow find you and try to steal your fish. If this style of fishing is as easy as developing familiarity with the bird, and tying a knot around the bird’s neck so that it can’t swallow your bigger fish, then it seems like this should’ve gotten picked up by other fishing villages worldwide by now. It’s not like fishing is a new skill, and rope has been around forever.