‘V For Vendetta’ In The Year 2020: A Thoroughly Chilling Watch In Retrospect 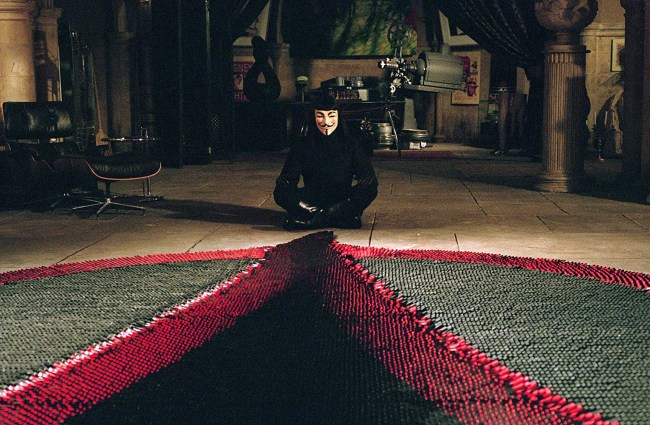 In the way in which women in rom-coms listen to sad love songs to cope with a break-up, I watch movies to cope with our reality. Call it escapism or what have you, something about seeing how characters react to situations that reflect our own brings me comfort.

EXCEPT for when I watched V For Vendetta yesterday. Put succinctly as possible: yikes. What an awful idea on my part, as it sort of presents a worst-case scenario of where this hellfire snowball of a country could, possibly, one day, end up.

In case you need a quick refresher, V For Vendetta is, broadly, a story about a vigilante overthrowing an oppressive government. Now, this is not an idea that’s unique to V For Vendetta, as its a scenario that we’ve seen explored in countless pieces of pop culture (and, more notably, in our own societies throughout history).

Instead, like most things in this life, the devil lies in the details, and that is what made the retroactive viewing of V For Vendetta so personally chilling.

As you’ve probably noticed, the mask donned by the film’s titular character is the same sported by the infamous international hacking group known as Anonymous, who — after being completely underground for the last few years — returned over the weekend to, uh, really let that choppa sing, as the kids say (do a quick search of #Anonymous on Twitter if you haven’t already). Granted, it was likely an intentional choice by both, as the mask is the face of Guy Fawkes, a 16th-century freedom fighter who attempted to blow up the Westminster Palace.

Then, of course, there’s the actual plot of the film, which follows V (who remains faceless throughout the entirety of the movie) as he uses admittedly terroristic tactics to inspire a revolution and overthrow the United Kingdom’s neo-fascist police-state-enforced government which — get a load of this one — rose to power by unleashing a deadly virus on its own people.

In the midst of these escalating tensions — as the film puts it, “with so much chaos, someone will do something stupid” — a police officer then shoots a V-mask-wearing child (spurred on by the deranged totalitarian leader who said he wants “anyone caught with one of those masks arrested”), prompting all hell to break loose.

As I said earlier, put simply as possible, while this may remain a distant worst-case scenario, ALL THE YIKES.