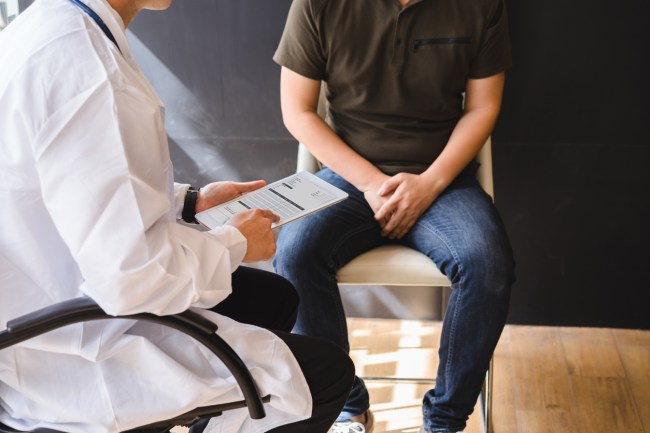 As soon as those infamous words leave her lips, your stomach does somersaults and all your life plans seem to go up in flames as you try to stay in the moment and conceal your all-consuming fear. After what seems like an eternity, you snap back to reality and begin the long and uncomfortable conversation that will last for what seems like eighteen years.

A close call like this is an experience that is all too real in my memory. Thankfully, it was only a scare, but the scar is profound and lasting. Consequently, the thought of never having to go through another such ordeal is an appealing dream.

Thanks to modern medicine, there’s a practical and harmless way to follow those dreams, and my group chat at work has been lighting up all week about it.

As the youngest member of my office crew, I’m the only one without children. This year, most of them had their second kid. Now that they have an heir and a spare, they—with their wives’ encouragement— decided to get vasectomies.

For anyone who is not married, “encouragement” means “my wife told me to do it and I either lost or don’t care enough to fight.” After learning about my friends’ plans to separate their twig from their berries, I started talking a lot of shit in our group chat. After all, how could they give up something so essential to their being?

Surprisingly, what began as me trying to bust some detached balls soon became a realization that I was envious of their newfound freedom.

They could now actually live the consequence-free, sex whenever/wherever lifestyle that we all like to pretend we have. There’s no longer any need to worry about someone taking a pill on time every day only for some antibiotic to screw the whole thing up.

Gone are the mild heart attacks and fervent prayers after remembering that birth control is only 99% effective. “Condoms are for cowards!” they shout with reckless abandon. These infertile myrtles laugh as they throw cribs and strollers into the dumpster knowing their days of crying babies and sleepless nights are a vas deferens away.

Through their surprisingly cordial responses to my roasting, I learned more appealing facts about this liberating procedure. For example, they got three days off work to recover, which one guy scheduled during The Masters and the other during the NCAA Tournament.

Such genius planning allowed these geldings to catch every riveting moment from the comfort of their couch high on painkillers while idiot stallions checked updates on their phones from the office.

These barren barons not only didn’t take shit from their wives for spending all day drinking on the couch but their wives rewarded them for their selfless act of commitment. Platters of food and unlimited beers were brought to them as they kicked back and relaxed with their bag of frozen peas on top of their prescription underwear.

While “The Big Snip” is permanent, it isn’t instant. My colleagues have actual doctors’ notes ordering them to “clear their pipes” 18 times— at a minimum— after their recovery.

Why 18? No one knew for sure but I’ve decided not to question it and defer to scientific wisdom— especially the wisdom of my friend’s physician, who suggested “wife-induced clearing” because Navy doctors are hilarious (and also can’t be sued).

Even if these sterile sailors have to go it alone on their quest, they do so with the full blessing and support of their family and friends. Getting a dozen “Get Out of Yet Another Swim Lesson to Whack Off” cards has to be worth some anesthesia and “slight” discomfort.

Before you all run off to get your vasectomies, there are some obvious drawbacks. I’m told that while most of the pain is taken care of by the anesthesia, the smell of cauterizing can haunt your dreams and ruin BBQ for a bit.

While my coworkers were back to work after three days, they also had to miss a week at the gym. If you’re all about that #GAINZ life, you may want to remember that.

Lastly— and maybe most importantly— it does stop you from having kids, which is the only thing currently standing between me and peace of mind.

My wife and I are a bit more established now so a child wouldn’t be the world-shattering event that it would have been in college. We’ve even had conversations about intentionally having a kid in the next few years.

It’s worth noting that vasectomies are technically reversible, which we all learned during Michael Scott’s dinner party,

With that said, I am not on board with going under the knife multiple times. Since we are currently delaying kids to focus on more pressing matters like brunch, exotic travel, and sleeping off hangovers, we’ll have to continue to use less than 100% effective birth control and live our lives under this constant threat of terror.

However, if you happen to know somewhere I can find a kickass discount on sperm freezing, then all I’d need to figure out is when I want to cash in my three-day couch pass.

For a slightly different perspective, check out the story of the guy who got a vasectomy when he was 25.