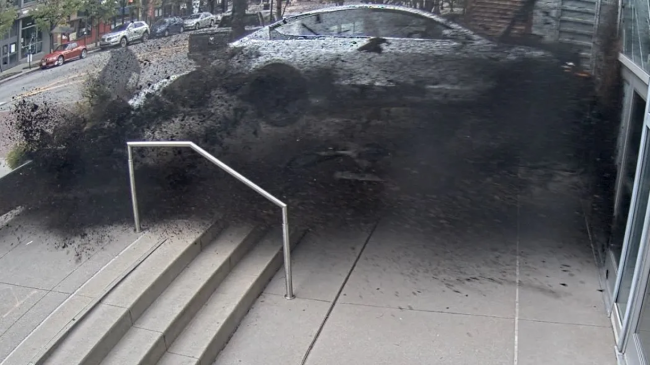 Someone must have seen Jerry Jones’ scary car crash and thought to themself, “Hold my beer.” Because video of a Tesla traveling at a very high rate of speed, then going airborne and evaporating the wall at the Greater Columbus Convention Center really has to be seen to be believed.

The Tesla reportedly blew through a red light before jumping the curb, driving over a planter and going airborne over a staircase before disappearing into the building and striking a pillar.

According to the Columbus Dispatch, the 2020 Tesla Model S was traveling around 70 mph when it hit the convention center wall.

Columbus police said the crash occurred around 12:30 p.m. Wednesday when a white Tesla that witnesses said was traveling at a high rate of speed eastbound on Vine Street went through a red light at North High Street, struck the curb in front of the Greater Columbus Convention Center and went airborne — launching the vehicle over the top of large concrete planters on the sidewalk that Brown said are designed to stop vehicles from hitting the building.

The Tesla crashed through a glass exterior of the convention center and plowed into an unoccupied meeting room area inside.

The Tesla I removed from Columbus convention center today.#callahook#protow pic.twitter.com/qFnU8mKfj9

The driver of the Tesla, 63-year-old Frantz Jules, told Columbus police that he “lost control of his brakes and was unable to stop” the car while on a downtown highway so he took an exit and ended up inside the convention center.

Witnesses to the crash said it did not appear Jules applied brakes before launching the Tesla into the building, causing $250,000 to $300,000 in damage, according to Scott Reed, the Capital Projects Director. The wild crash ended up causing damage to the walls, the sprinkler system, power lines, carpeting and wall coverings.

Security video did show Jules avoiding another vehicle on the road before hitting the building, according to Don Brown, executive director of the Franklin County Convention Facilities Authority.

Jules was cited by police for failure to control and was taken to a local hospital in stable condition for evaluation.