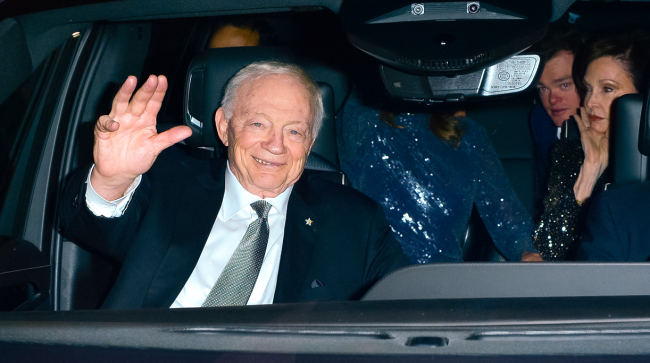 Last week, after Dallas Cowboys’ owner Jerry Jones was briefly hospitalized following a car crash and video of the accident was posted online, the 79-year-old billionaire appeared to have been lucky to walk away with nothing more than minor bumps and bruises.

On Wednesday night of last week, Jones was traveling in a dark-colored sedan at a relatively high rate of speed when a silver car appeared to turn left in front of his vehicle.

Jones’ car, without slowing down, then smashed into the other vehicle, t-boning it with a direct and very hard hit on the silver car’s driver’s side door before coming to a stop in the middle of the road.

Footage of the crash showed the wheels on the driver’s side of the silver car were briefly sent into the air, but no major injuries were reported.

In fact, later in the video, Jones is seen out of his car, walking toward the other vehicle and its passengers then speaking with Dallas police about the accident.

Now, according to the Dallas police report on the fender bender it was the driver of silver car who was to blame.

NBC 5 News in Dallas reports that the driver of the silver car was making a delivery for Door Dash Wednesday evening when the crash occurred. He also reportedly told police “investigators that while driving southbound on Harry Hines Boulevard he realized he needed to make a left turn onto Wolf Street.

“The driver slowed down at the intersection, coming almost to a stop, then made an improper turn from the far right lane putting him directly in the path of Jerry Jones’s car, according to the crash report.”

Interestingly, despite the police report on the accident stating that the posted speed limit on that particular block is 35 mph, it makes no mention of how fast Jones was traveling when he struck the other vehicle in the door.

In semi-related news, “Papa John” Schnatter claimed that at some point over the past several years Jerry Jones and Washington owner Daniel Snyder asked him to collude against Roger Goodell to try and get the NFL commissioner fired.

Neither Jones nor Snyder, or Goodell for that matter, have responded on Schnatter’s claims.