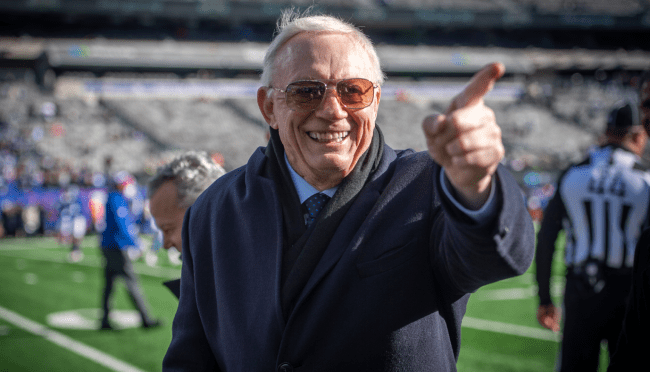 Dallas Cowboys owner Jerry Jones was involved in a car crash on Wednesday night that sent him to the hospital where he was treated and released.

The 79-year-old, according to TMZ, which has obtained video of the accident, “T-boned a car while traveling at a relatively high rate of speed.”

In the video a silver car is seen attempting what appears to be a lefthand turn from a right lane when Jerry Jones’ dark-colored sedan t-bones the silver car briefly lifting the wheels on the driver’s side of the car into the air.

Footage also shows Jones, out of his car, walking toward the other vehicle and its passengers then speaking with Dallas police about the accident. Police did not say if Jones was driving or was just a passenger.

Jones, once out of his vehicle, appeared to have a slight limp and at one point pulled up his pant leg to inspect his left leg and the area around his knee.

An occupant from the other vehicle involved in the crash appeared to “be complaining of some kind of head pain,” according to TMZ, but authorities have not released any details on the individual’s condition. A Dallas police spokesperson said the department does not release details about individuals involved in car accidents unless there is a fatality.

Jerry Jones recently went viral for flashing the Dallas Cowboys’ draft strategy sheet to the media in an effort to prove that he knew what he was doing with his first selection in the 2022 NFL Draft. It was reportedly the fourth time since 2010 that Jones had managed to somehow leak the Cowboys’ draft list.

Internet sleuths then went to work deciphering what names were on his draft list and were able to figure out 34 of 39 names printed on the piece of paper.