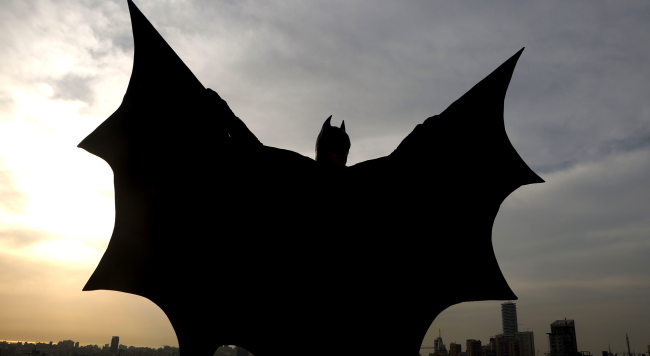 As Christian Bale said in The Dark Knight Rises, “a hero can be anyone,” and one man in Stockton, California appears to have taken that statement seriously.

A vigilante who calls himself “Bruce Wayne” and the “Stockton Batman” claims to have caught hundreds of alleged criminals including the recent capture of a murder suspect in a double homicide reported in the city of Lodi, Calif.

According to a report by 209 Times, which calls itself an independent community driven grassroots news source…

Self proclaimed “Bruce Wayne” who is known for fighting crime in Stockton, was on the scene nearby when he recognized a transient he was familiar with and approached him. After noticing he was covered in blood and had slice wounds to his hand and leg, he detained him and immediately called Lodi Police.

The possible suspect has been transported to the hospital to treat the injuries Bruce Wayne believes were sustained during the attack. Police have not yet made an announcement.

A reporter for CBS Sacramento stated in a televised report about the arrest, “Police are not commenting on the man’s claims. They haven’t even let us know or confirmed how many people died. The man who calls himself Stockton’s batman claims in a social media post the two victims were stabbed.”

Responding to the reporter, one of the news anchors explained, “Let’s set the scene. A guy who identifies himself as Stockton’s Batman posted on social media that he thinks he has caught the guy responsible for what he calls a double murder, saying he has been watching this person for months.

“We know this guy claims he made hundreds of citizens arrests. He doesn’t like to show his face or use his real name.”

In a later report confirming that a suspect had been taken into custody, CBS Sacramento stated that the arrest was “made in part to the man who calls himself Stockton’s Batman.”

The Stockton Batman shared a longer video on YouTube showing the double-murder suspect being arrested.

Back in 2018, the Stockton Batman spoke with CBS Sacramento after he detained a man he claimed was smoking crystal meth outside a 99 Cents Only store.

“I grew up in Stockton and things weren’t always this bad when I was a child,” he explained.

“He’s doing a pretty good service for us. He’s, you know, getting ’em where the police aren’t, said one witness.

“That’s pretty cool. Anything to get more crime stopped in Stockton,” commented another.

And just in case anyone was wondering, he told CBS Sacramento, “I am the real Batman.”