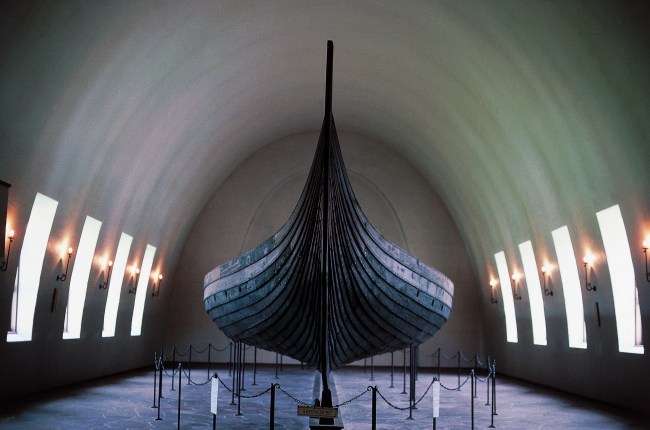 The photo is of a Gokstad viking ship, not the ship that was found by radar.

A high-resolution radar discovered a 1,000-year-old Viking ship at a “high-status” burial site in Norway. Ground-penetrating georadar revealed a Viking ship beneath the topsoil of a farm near the town of Edøy in western Norway, only five feet below the surface.

Archaeologists from the Norwegian Institute for Cultural Heritage Research (NIKU) made the exciting discovery and published its findings on Tuesday in the Antiquity journal.

The radar detected a “high-status” Viking burial site, where Norwegian archaeologists believe there was a feast hall, cult house, farmhouse, and the ship. There are 13 circular burial mounds, some as large as 98 feet. Historians believe this cemetery and settlement was for the elite members of society of its time.

The site of a #Viking ship burial that was discovered two years ago has turned out to be the location of so much more. Thanks to high-tech radar #Norwegian archaeologists have discovered it was a Nordic center of power.https://t.co/o95N1v5GDl pic.twitter.com/iWuoTuz3SS

The 55-foot-long burial ship would have held the body of a notable Norse leader along with weapons and anything else they would need in the afterlife. The ship, which was found through GPR-scanning technology, has suffered damage after a thousand years of plowing on the surface, but most of the hull appears to be intact.

But why was the boat buried in the ground and not out at sea? Lead study author Lars Gustavsen, an archaeologist with the Norwegian Institute for Cultural Heritage Research, responded by saying, “We do not really know for certain. Since these were societies whose identity was closely tied to the sea and seafaring, the ship could, in this specific context, be seen as a vessel transporting the dead from the realm of the living to the realm of the dead.”

“Or it could simply be a display of wealth, or to demonstrate that one belonged to a certain social and political class,” Gustavsen explained. “We can probably say that it was important for the elite to exhibit their status through lavish and carefully planned burial rituals.”

“We knew that there was something special there, but we had no idea that there was going to be a ship burial, that’s pretty unique,” Gustavsen told CNN.