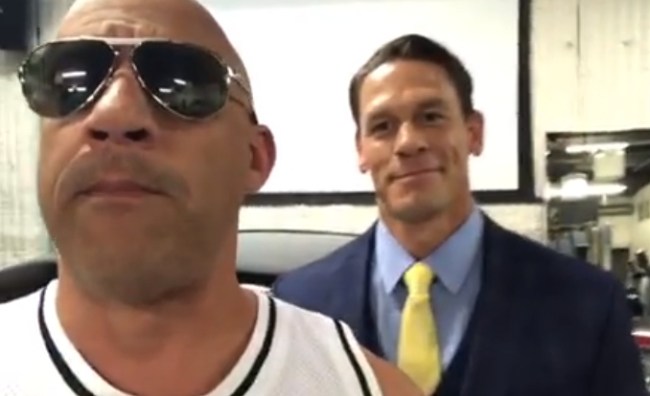 Fast and Furious movies are no stranger to starring professional wrestlers since they featured Dwayne “The Rock” Johnson as a major player, then he got his own spin-off film Hobbs & Shaw, which rides into theaters on August 2. With The Rock possibly getting the lead in multiple Hobbs & Shaw movies with Jason Statham, there is an opening in the original Fast and Furious movies. Enter John Cena.

The 51-year-old Vin Diesel, who plays Dominic Toretto in the movies, posted an Instagram video on Saturday from the Toretto gym. Diesel noted that his former Fast and Furious co-star Paul Walker sent him Cena to star in the upcoming F&F film. Walker died at the age of 40 on November 30, 2013, when the Porsche Carrera GT he was driving crashed into a concrete lamp post and two trees.

“As you know I’m always thinking fast and I think about the responsibility of making something iconic and deserving of your loyalty,” Diesel said in the video. “I know this sounds crazy but every blue moon I feel like Pablo up there sends me someone, another soldier for the fight for truth and today someone came by the Toretto gym that speaks to what Pablo would have brought.”

The 42-year-old wrestler did not speak during the video, only doing a weird magician hand gesture. The Rock and Diesel had a “candy ass” feud for the last few years, sparking rumors that they’ll never do another Fast and Furious movie together again, hence opening the door for Johnson to do the Hobbs & Shaw movies.

Now Cena, a fellow wrestler gets to take Johnson’s spot. And it stings extra for The Rock since he had a healthy rivalry with Cena during their WWE days. At WrestleMania 28 in 2012, The Rock defeated John Cena and the following year Cena beat The Rock at WrestleMania 29, giving Cena his record eleventh WWE Championship. Now the Fast and Furious franchise is turning into their own professional wrestling-esque zoo. Fast and Furious 9 is scheduled to smash into theaters on May 22, 2020.