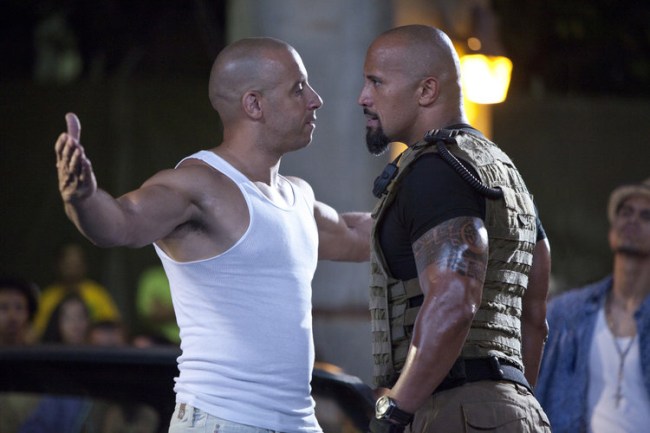 Over the course of approximately 134 films, the Fast and the Furious franchise has managed to achieve an impressive amount of box office success thanks to a proven formula of having muscular guys hop into muscle cars while driving fast and getting furious at each other.

This week, we were treated to yet another installment in the form of Hobbs and Shaw, which features Jason Statham and Dwayne Johnson joining forces and doing exactly what they’ve done in every other Fast and the Furious movie they’ve appeared in.

I’m not trying to knock the franchise, as it seems to be aware of just how absurd it’s become and I genuinely enjoy the movies because I possess the ability to not take every single thing in life too seriously.

However, it appears the same can’t be said for some of the people who have starred in them.

According to The Wall Street Journal, a number of sources who have worked on the Fast and the Furious films say Statham, Johnson, and Vin Diesel have attempted to take steps to ensure their characters never lose a fight in the movies (you know, the movies where the script dictates a predetermined outcome).

Here’s what the outlet had to say:

According to producers and crew members on the films, Mr. Statham, 51 years old, negotiated an agreement with the studio that limits how badly he can be beaten up on screen.

Mr. Diesel, 52, has his younger sister, a producer on the films, police the number of punches he takes. And Mr. Johnson, 47, enlists producers, editors and fight coordinators to help make sure he always gives as good as he gets.

That’s right—Vin Diesel’s ego is somehow bigger than his biceps and so fragile that he has to ask his sister to make sure he (who, again, is playing a character whose fate is already sealed) doesn’t get beat up too much.

Man, Hollywood is a weird place.