For the record, I ordered her the Uber. One must wisely choose the hills upon which one dies. New @oopsthepodcast talking walks of shame and the Social Dilemma. Subscribe link in bio 🦀🦀🦀 @notjulio @chris.mp4

Last week, I posted the above clip from our podcast Oops on my Instagram. As most of you will probably realize, I’m doing a bit here. This isn’t some autobiographical, footnoted accounting of a post-sexual interaction; it’s a joke. I’m a comedian, speaking on a comedic podcast, with the cameras rolling. I recognize that people are taking comedians literally these days, which is both sad and even a bit irresponsible. I also understand that my clip might infer a few things. Saying “she spent the night… this was back when I was single” would lead most people to think we engaged in some hanky panky. But that’s not at all how things ACTUALLY went, and I’ll provide some context first.

A young lady did spend the night. And she did say to me “the least you can do is call me an Uber.” But SHE was kidding. And the reason she was kidding was because I was sprawled on the couch, dying from a hangover, and she was poking fun at how deathly I felt. We’d had a great time the night before, dancing and carousing until the wee hours of the morning. At some point, we retired to my apartment where I was far too inebriated for any sort of meaningful physical exchange. I think I even told her I was worried I might throw up (I had the dreaded spins), so she tucked me into my couch and placed a big salad bowl nearby in case I needed to upend my stomach. I think she was a registered nurse, and a wonderful person. She took the bedroom and all was square. We’re friends to this day, and we’ve joked about that night often.

Obviously that context changes the entire complexion of this clip. But just as it’s impossible to know that any of it happened that way, it’s equally impossible to know that it didn’t happen that way. Meaning… there isn’t much information to go on here, and anyone who tries to draw conclusions about either my character or her character, or what actually happened, or what it means about gender roles in 2020, is relying upon their own ENORMOUS, ASININE assumptions. 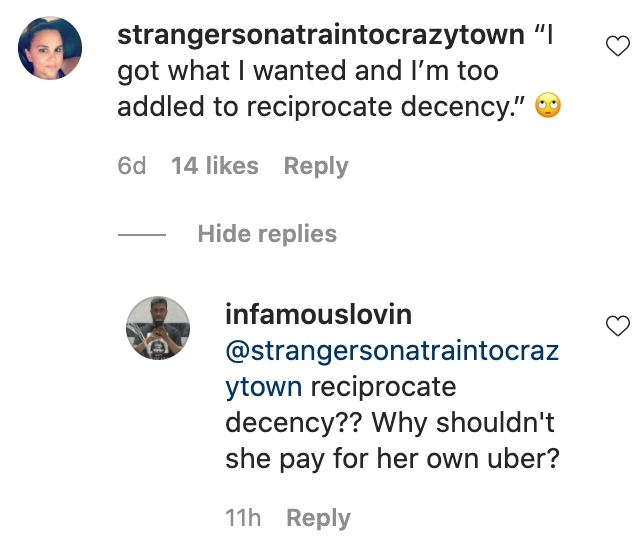 Strangers starts out with perhaps the biggest mental leap of the entire exchange. “I got what I wanted,” she accuses. As we know, that couldn’t be further from the truth. But more importantly, her followup: “I’m too addled to reciprocate decency.”

Let’s treat this as the thesis for the ensuing debate. Essentially, Strangers believes that the act of a woman consenting to sex should be met with an Uber ride home in the morning. To her, that’s reciprocity. That’s your quid pro quo, your exchange of goods for services rendered.

I disagree, but from a semantic standpoint. In fact, I do believe that ensuring a woman returns to her home safely in the morning, in the comfort of an Uber, is the right thing to do. Even if it means putting my good 4.87 Uber rating in jeopardy.

However, let’s invoke Newton: “For every action there is an equal and opposite reaction.” I don’t think that Ubers are the equal reaction to sex. I think sex is a mutual act—at least it should be. Two consenting adults, knocking boots for mutual benefit and pleasure. Of course it doesn’t always work out that way, but that’s certainly what you hope for between good and decent people. Once the sex is complete, you should behave decently towards each other. That might include fetching her a glass of water, or lending him a toothbrush, or providing her a t-shirt to sleep in, or giving him the good pillow. Those things are all the small acts of kindness that you hope for in the wake of sex. Those are the things that might lead to a continued relationship, feelings, etc.

If I were to sleep at a young lady’s apartment, I certainly wouldn’t expect her to call ME an Uber in the morning. That doesn’t seem like the equal and opposite followup to sex. I realize that gender plays a big role in all this, but I’m only analyzing the argument for argument’s sake. And I wasn’t alone…

In response to all this, “infamouslovin” enters the fight. A worthy challenger? We shall see. Strangers counters: 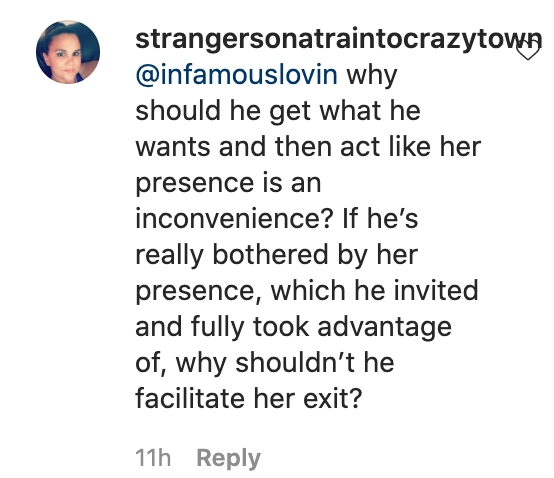 It’s only comment #2 from infamous and we’re already off the rails. Facilitate her exit? Like I’m the Secret Service? “Golden Phoenix is coming down the stairs. Stagecoach is arriving now, over.”

Secondly, I hardly think that the clip would lead one to think I was “inconvenienced” by her presence. I believe the words I used were “yeah, no problem.” That’s noncommittal at worst; not inconvenienced. I won’t get in to the “taking advantage” nonsense because infamous covers it with his response(s): 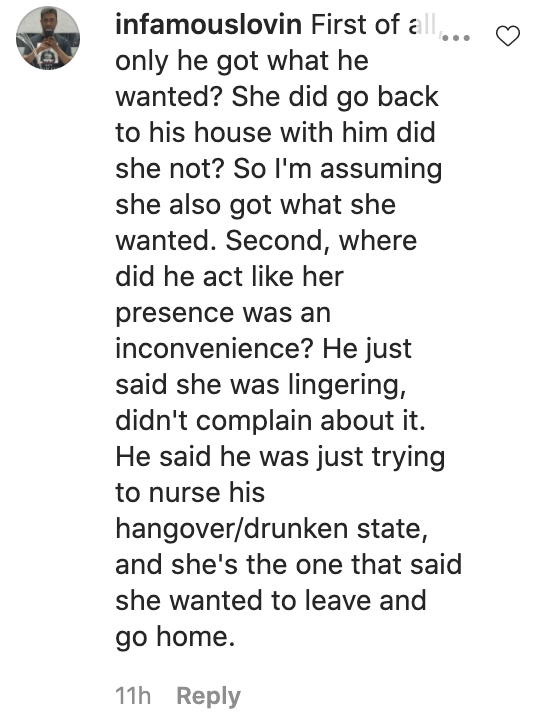 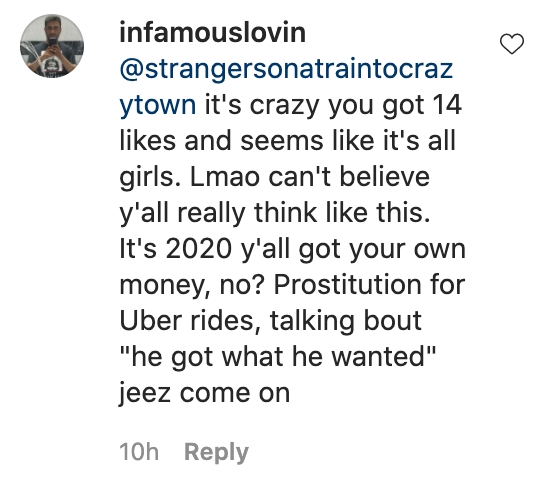 Eh, mostly agreed. Not sure I’d call it prostitution but hey, swinging for the fences here, I don’t hate it. 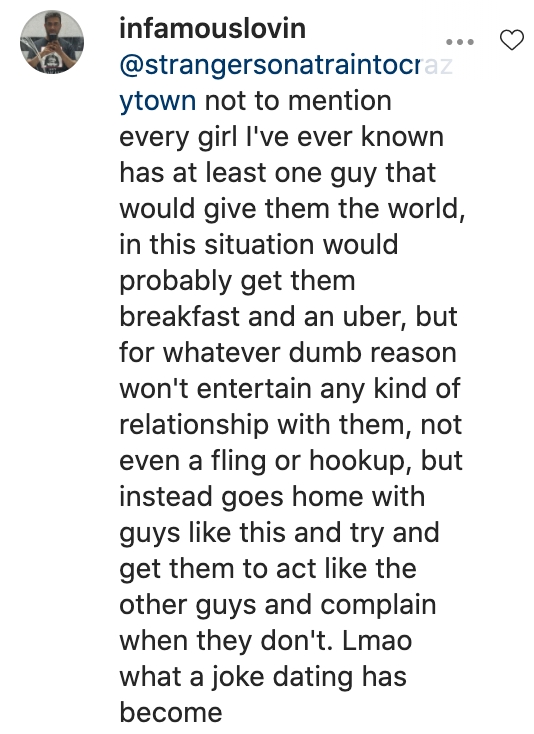 Ah, you lost me there. Too far. I got off at the last exit pal, sorry. This screams of a young man who was broken once, or perhaps often, by his unrequited love. You showed your hand too much there dude. You let your emotions get in the way. You were winning, until you weren’t… and Strangers smells blood in the water: 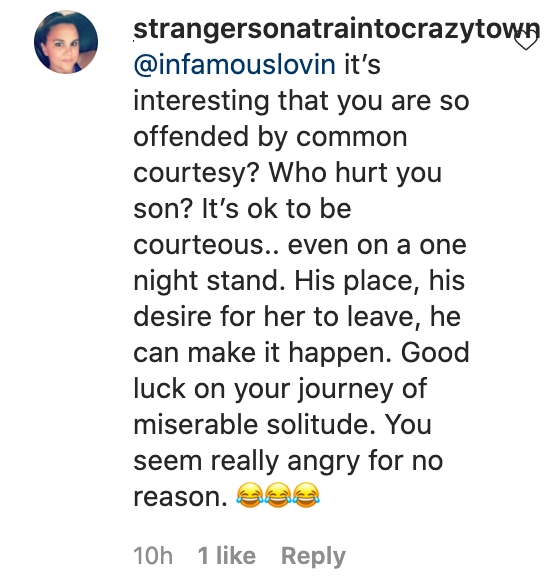 “Who hurt you son?” is the perfect response. It’s going to make infamous FURIOUS (as you’ll see) and also makes the whole debate personal, but only because he opened the channel first. When you find yourself in a vicious internet comment cockfight, you have to keep your personal feelings out of it. Otherwise, you’re lost. “Good luck on your journey of miserable solitude.” Ouch. That’ll leave a mark. 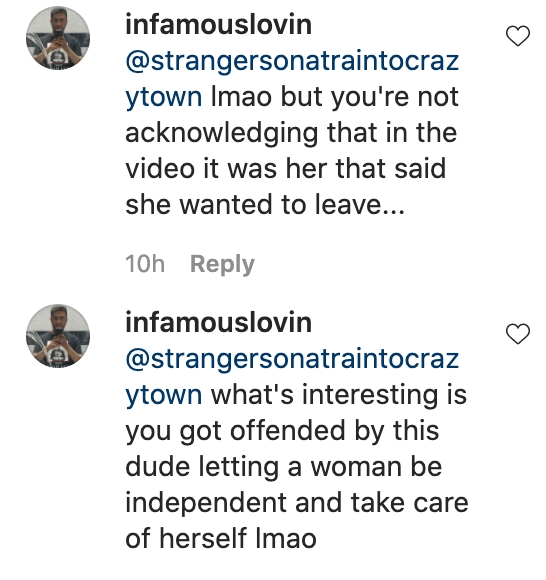 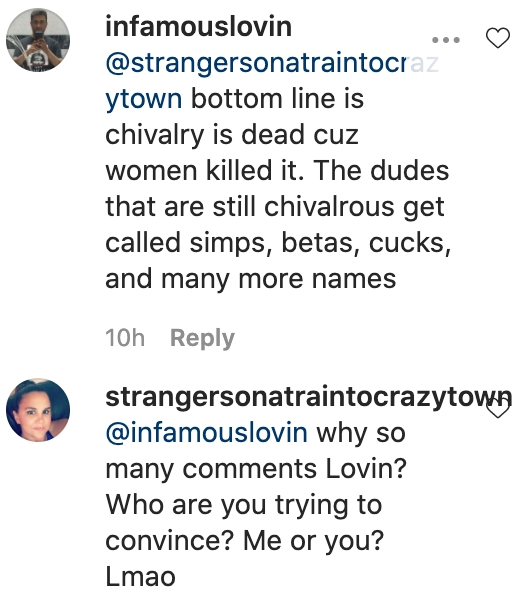 Uhm, infamous? You’re starting to sound… incel-ish. I truly believe this is how incels are made. “Chivalry is dead because women killed it” might even be their slogan. And then to list the names that clearly, you’ve been called, is tragic. Simps, betas, cucks… dude, none of that is real. That’s all just stupid internet parlance; made-up buzzwords that don’t mean anything. Don’t take it personally dude. Unless we’re talking about literal cucks, where you encourage your wife to bang another man in front of you because it turns you on? That’s… a lot.

Meanwhile, Strangers knows she’s won. Sorry infamous but whenever you respond with three straight comments—the dreaded turkey—you’ve lost. And she knows it, and now she’s basking in it. Game, set, match.

In the end, they’re both losers. Because nobody should ever have a debate in the comments of third party’s instagram post. It happens, but it shouldn’t. These two should have DMd each other and kept their argument behind closed doors. Instead, they’re scream-typing at each other in the comments of a public post from a comedian recounting a stupid thought about syntax.

The stakes… are low.