The Wasp’s Suit Has Changed A Lot Since The ‘Ant-Man’ Post-Credits Scene, And With Good Reason 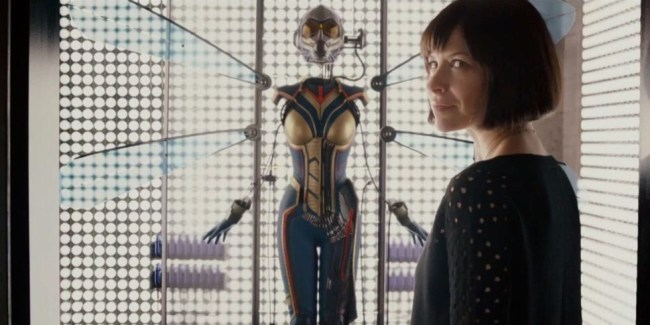 So who’s psyched for Ant-Man and the Wasp to come out on July 6th? Show of hands, please. Okay, that’s most of you. Cool. It should be a good movie. I mean, it’s Marvel and their track record has been pretttty darn good as of late.

Marvel Studios just released yet another new trailer on Monday called “War.” Check it out…

Cool, huh? You know what else is cool? The Wasp’s badass suit, which puts poor Scott Lang’s Ant-Man gear to shame.

But did you notice how Hope van Dyne’s suit looks quite a bit different from the one we saw hanging on the wall in the post-credits scene after Ant-Man? That’s it in the shot at the top of this page. See how it’s got a lot more gold and really doesn’t look anything like what we have been seeing and will see in Ant-Man and the Wasp.

Turns out that there is a very good reason why The Wasp’s suit looks very different now that it actually on Evangeline Lilly’s body.

We know this because Screen Rant brought up this very topic with Ivo Coveney, the film’s Specialty Costumes Supervisor.

How about going from this – from the rendition of the Wasp costume we saw at the end of Ant-Man to this one here? Did you guys, at that time, plan on going on with that look or this one?

Ivo Coveney [Specialty Costumes Supervisor]: No, what they had – the concept that we’ve worked on for this is the concept that I saw at the end of, of the first film. However, that one was just beautifully CGI’d, and as is often case we don’t have to worry about the human body. So, it is – as soon as you have to put it on the human body, you have to make it work. This is very faithful.

Yeah, it is pretty hard to slip into a CGI costume in real life. Still doesn’t totally explain the change in colors though, does it?

Eh, maybe it was just a protoype that Hank Pym cobbled together during the time of the first movie, right?

Also, do you know who else’s suit has been changed since we last saw it? Ant-Man’s.

Yep, Scott’s suit in Ant-Man and the Wasp looks rather different from the one we last saw in Captain America: Civil War.

No, this is not one of the new features below…

But you may notice that the new Ant-Man costume’s chest piece doesn’t have as many details as it did in Civil War. Paul Rudd did tell Screen Rant that the armor he’s wearing in the sequel is brand new, which in a way makes sense considering how many different Iron Man suits Tony Stark has worn over the years.

As for what this new suit can do that the old one couldn’t Rudd wouldn’t say. Guess we’ll just have to go see the movie to find out.