On Monday, several of the superheroes of Avengers: Infinity War hilariously asked the question, “Where were Ant-Man and the Wasp?”

And by a little better, I mean that literally and not in the pun sense. After seeing the trailer we still really don’t know much about what’s going on in the movie, but it gives us our first good look at supervillain Ghost portrayed by British actress Hannah John-Kamen (Killjoys, Black Mirror, Game of Thrones, Ready Player One). The trailer also expands on just how incredible Hope Van Dyne’s new abilities are as the Wasp. Sorry, Scott.

According to most reports, Ant-Man and The Wasp takes place at some point before Thanos arrives to wreak his havoc in Infinity War. The synopsis for the film states, “In the aftermath of Captain America: Civil War, Scott Lang grapples with the consequences of his choices as both a super hero and a father.”

And while the synopsis doesn’t mention it explicitly, the story is expected to revolve around both supervillain Ghost as well as Scott, Hope and Hank Pym’s search for the original Wasp, Hope’s mom Janet Van Dyne (Michelle Pfeiffer).

There is also a brief introduction of Laurence Fishburne as Dr. Bill Foster in the trailer, a former collegue of Hank Pym and, oh yeah, the second Giant-Man and the fourth Goliath in the Marvel Comics.

As for new supervillain, in the comics Ghost was a male programmer and an engineer who created “Ghost Tech” which enabled him to turn himself and any objects he touches invisible or intangible. He wears a high-tech battle-suit that allows him to hack and reprogram electronic systems in his vicinity as well as intercept or tamper with electromagnetic signals.

The death of his lover thanks to his company’s board of directors turns him into a vigilante with the goal of completely wiping out corporatocracy.

Whether any or all of that will match up with Ghost in Ant-Man and the Wasp remains to be seen. What we do know is that she has a really cool suit in the movie. 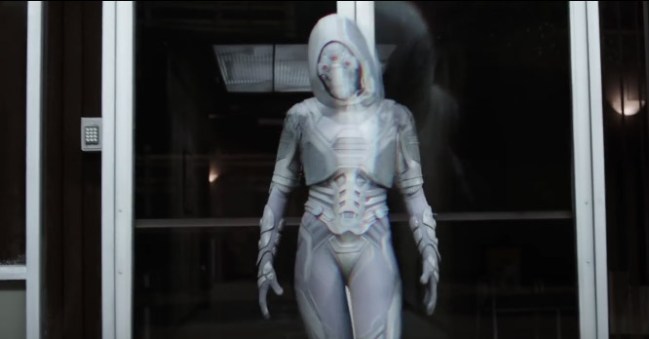 Thankfully, my alteration of the film’s new poster so far doesn’t seem to apply… yet.

Check out the new trailer below…