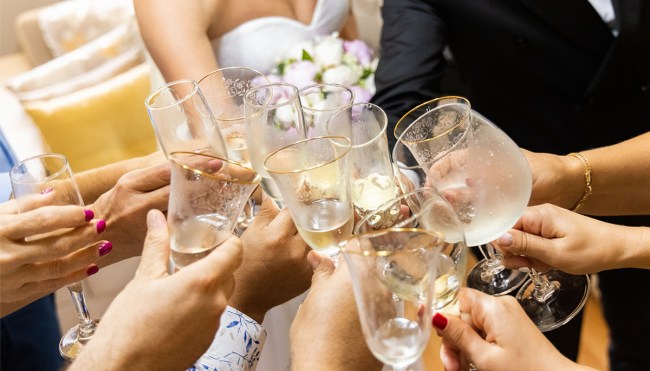 There are plenty of reasons people look forward to weddings, whether it’s being able to share and bask in the joy surrounding the happy couple on their Big Day or getting the chance to catch up with old friends and family members you haven’t had the chance to see in a while.

Of course, there are also plenty of guests who look forward to the one element that serves as one of the main attractions at any reception worth attending: the open bar.

Most wedding veterans know the key to maximizing your enjoyment (and justifying the money you probably spent on flights and hotels) is harnessing the same philosophy once associated with Chicago’s political scene: drink early, drink often, and don’t think twice about greasing some palms to ensure the bartenders will go out of their way to help you achieve that goal.

Of course, you obviously want to try and pace yourself over the course of the festivities to avoid becoming That Guy. With that said,  there’s a reason smart brides and grooms include some packets of Advil in the care packages that get handed out to guests when they check into their room, as you probably won’t be the only person who ends up getting slightly overserved by the time last call rolls around.

Nothing highlights that reality quite like an incredible video that was filmed at a wedding that presumably took place somewhere in the United Kingdom where someone in attendance had the brilliant idea to check in with people during their first and last drink to see how they changed over the course of the night.

As you can clearly see, most of the attendees were decidedly sloppier during their exit interview—including the bride, who I’d argue is the real star of the entire thing.

First and last drink footage is hillarious. Why has no one done this before? 🤣🤣🤣 pic.twitter.com/KAZ367uwaS

This, my friend, is what true art looks like.