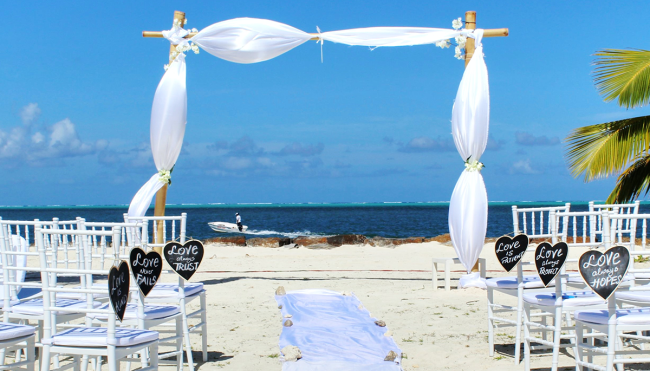 I think most people who’ve tied the knot would agree the best part of your wedding day is when it’s finally over; sure, the whole “getting married to the love of your life thing” is certainly near the top of the list, but there’s really nothing better than getting back to your hotel room and realizing you’ll never have to pretend you care about the particulars of flower arrangements ever again.

One of the first things you learn when you start planning “your” big day is that the day really isn’t about you at all but rather the guests who will absolutely be judging every single detail and decision you make. As a result, it’s important to prioritize their needs, and while that usually means you’ll have to spend more money than you’d probably prefer, you can’t really put a price on memories (unless you’re fine with having your wedding be primarily remembered as “the one with the cash bar”.)

You can certainly get married without spending a fortune, but if you want to have a traditional ceremony and reception, you need to accept weddings are inherently expensive affairs—as evidenced by this $240 invoice that was recently sent to a guest after they failed to show up to one in Jamaica.

I don’t think I’ve ever seen a wedding reception invoice before lol pic.twitter.com/ZAYfGITkxP

The idea of sending someone a bill for failing to come to your wedding is such an absurd concept that I had a hard time believing it was real. However, after conducting an investigation with the help of my trusty sidekick Google, I can confirm the Royalton Negril Resort and Spa recently hosted a couple named Doug and Dedra along with the few dozen guests who watched them get hitched.

The invoice has been a hot topic of conversation since it started making the rounds on Twitter, with plenty of people expressing astonishment at the unbridled tackiness of the gesture.

I would send it back with some version of “Good luck trying to collect.”

A contract is not formed when you RSVP for a wedding.

If you can’t afford it then don’t have it. Not excusing rude behavior but stop doing big things if yo don’t have big pockets.

I had people not show up for our wedding. Also l had people not invited showup. Had to pay extra $500 to cover the additional 8 plates. It happens, we had fun and moved on. The no shows were covered already, hazards of giving a party.

Nah, this is petty. You create a budget for any event in advance. Either you can afford it if everyone shows up or not. No shows at a wedding might be personally hurtful but guests don’t owe you shit.

Stop spending so much on weddings. This is so stupid. Shit happens. Sending an invoice is incredibly tacky. If you can’t afford your wedding, make it cheaper. So dumb

However, plenty of others came to Doug and Dedra’s defense and argued the invoice was justified.

I wish I’d thought of this. A third of the people who RSVP’d for our wedding didn’t show up. We paid for a LOT of food that went to waste (though it was a LOT LESS than than $120 a plate).

Awfully tacky, but worse to RSVP and then not show up.

$240 is a lot to waste. …if there’s not proper excuse for not showing, they owe them people lol.

Fully behind this! Barring an emergency, how do you bail on a friend/family member’s wedding without telling them? Friends and fam- take heed! Drafting our no-show invoices now! 😈 https://t.co/Wlalf0oKIl

I’m personally hesitant to rule either way without knowing all the details. Ghosting a wedding you RSVPed to is obviously a dick move, and if we’re operating under the assumption that the guest who got hit with this bill didn’t even attempt to give the couple some last-minute notice, I can’t help but respect the pettiness of this gesture.

With that said, if you can afford to get married at a resort in Jamaica, $240 probably isn’t going to make or break you (and if that’s the case, you really, really need to reconsider your priorities). We’re also talking about a destination wedding that was consciously held while a pandemic continues to rage, so even if the guest confirmed their attendance during the final headcount, I think they get a pass assuming they gave the bride and groom a heads-up.