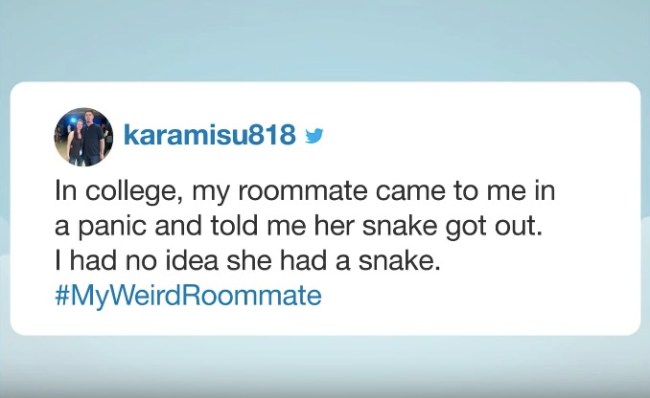 There are billions of reasons why two strangers might get paired up as roommates. You could be randomly paired with someone the freshmen year of college in the dorms. You could meet someone via Craigslist and hold a short interview at the nearby coffee shop where you try to assess someone’s entire life in 15 minutes.

The latter can get you in trouble. I had some weird ass roommates in NYC that didn’t last more than a couple of months because they’d shown up via Craigslist to sublease a tiny room we had in this apartment on the Upper East Side. I won’t go into details but suffice it to say there are some creepy reasons that the roommates never lasted.

I almost feel like living with a weird roommate is a rite of passage. You need to endure that awkwardness after moving out of your parent’s house. For most people, living under their parent’s roof is relatively easy but that rude awakening of life with an awkward roommate is just one of those tiny things that harden you for the harsh realities of life in the real world.

Jimmy Fallon sent out a tweet asking people for their best #MyWeirdRoommate stories and he compiled them into a video last night on The Tonight Show Starring Jimmy Fallon. I’ve got the clip below as well as a bunch of the tweets for people who’d rather scroll through tweets than watch a video.

I’m pretty sure this person’s roommate was a serial killer.

I once had a roommate who kept a bag, containing teeth of every single one of her siblings, under her pillow. One time, I even caught her kissing it… #MyWeirdRoommate

Nothing weird about this at all.

My college roommate bought some size 22 sneakers and put them in the middle of our living room, and when people would come over and see the giant shoes he would say, "Oh, my girlfriend's in the shower" #MyWeirdRoommate

Moved in with a guy who had a huge horror movie collection. When I asked, “So, you a horror movie fan?” He said “No, just taking notes.” That was day one. #MyWeirdRoommate

This makes no possible sense.

When I first met my college roommate, he introduced himself saying, "Hi, my name is Matt. I like dragons." He got kicked out of school six months later for unauthorized snake breeding. #MyWeirdRoommate

I had a roommate that would pour toilet bowl cleaner on his dirty dishes and then leave them in the sink. I guess he thought that if it was good enough to clean a toilet, why not a plate? #MyWeirdRoommate

The dude’s head is in the game. Don’t hate.

Do you guys have any weird roommate stories to share? I’ve shared some of mine on here in the past.