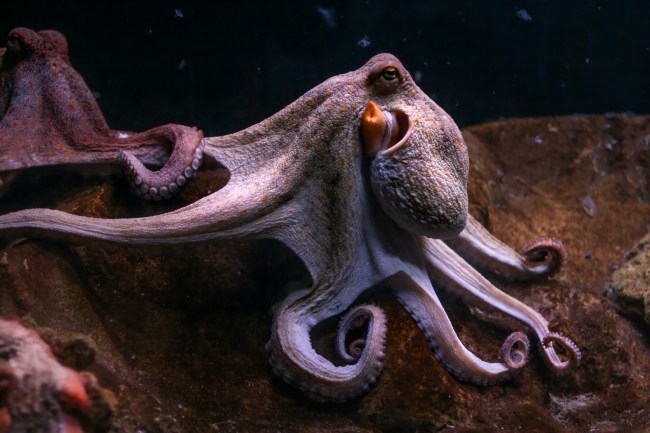 You know what’s pretty gross and something that we almost never ever thinking about? Right now, at this exact moment, there are probably tens of thousands of rotting dead whales sitting at the bottom of the ocean decomposing.

They’re all in various stages of disappearing. It starts with the big fish and sharks coming along and shredding the good flesh shortly after the whale died from whatever cause. Then the smaller fish come along and tear it to shreds. Then the worms and other ocean dwellers have their way until there’s not much left at all.

These events go unnoticed 99.99999% of the time but this time a group of marine scientists just happened to be cruising along with their deep-sea research submersible and find a smorgasbord. All sorts of bizarre creatures, rarely seen deep-sea dwellers, just going to town on this whale. And the footage they captured is mesmerizing.

They have a few videos that went viral on Twitter but there are better versions on their YouTube channel:

Some of the closeups are wild:

What exactly is a ‘whalefall’ you asked?

A Whalefall is when a whale carcass sinks to the ocean floor and supports a diverse array of life and there is a live feed of this happening NOW at https://t.co/P1x79X80zk #live #whale #eels #sharks #octopus #science #nautiluslive #scuba #deepsea https://t.co/DUuuXAv34E

WHALEFALLS ARE THE BEST ECOSYSTEMS ON EARTH

These gorgeous octopuses are Muusoctopus genus. We're not sure about the whale species yet but it may be a gray whale – stand by! @EVNautilus is on the case. #SanctuariesLive pic.twitter.com/wvZ5Pz4zv5

survey is currently interrupted by this photobombing octopus
🐙🤖 pic.twitter.com/nblxhY1Uj8

These octopuses, fish, crabs, etc are scavenging the whale fall.

There are also worms around sediment…some of the them specialize in eating bones!! #nautiluslive pic.twitter.com/k3CkCkjJj7

It just blows my damn mind that all of this is happening right now at the bottom of the ocean, on EVERY ocean, and we have no idea. They just stumbled upon this one by complete accident. A needle in a haystack.

For what it’s worth, the creature was a Baleen Whale. This ‘Baleen Whale’ term refers to 15 species ranging from the Pygmy Right Whale on up to the Blue Whale. Given how much this one was devoured there’s really no telling of what it was back on the surface, at least not from this footage.

To keep up with the undersea adventures from the EV Nautilus and their daily live streams on YouTube you can click here to visit their channel and subscribe.