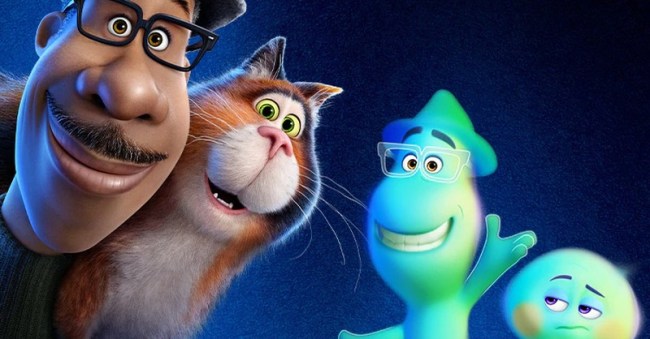 Soul is one of those once-in-a-decade masterpieces that feels more like a gospel about life than a movie. I put it up there with some of my favorite flicks of all time: The Big Lebowski, Blues Brothers, Shawshank Redemption, Groundhog Day, Star Wars Ep IV – VI, Rocky. Just as my colleague Eric predicted when the trailer was released, it’s the best Pixar movie since Wall-E and Up. As a singular piece of art, it’s so much more than just brilliantly jabs about the New York Knicks.

So… Let’s talk about it! Spoilers ahead, so scroll at your own risk.  I recommend watching Soul on Disney+ completely raw, without reading others opinions about it. Light some candles, turn off your phone, get your brain in a great place, sit back, and experience it.

This movie is pretty heady about the nature of life itself. Whereas other studios cower or struggle with delivery on topics of mortality, Pixar isn’t afraid to explore themes about infinity and beyond in their storytelling with the broadest brushstrokes possible. It takes guts to do on the scale they do it because nothing misses the mark more when a movie tries to explore deep philosophical concepts with a weak narrative structure (I’m looking at you, Butterfly Effect).

Joe Gardner, a middle school music teacher, aspires to “make it” as a jazz musician. Well into middle-age, he’s succumbing to the awful “those who can’t, teach” mentality, anguished by the idea he’s taking an L on his dreams by settling for a career as an educator. His true purpose, in his head, is to be a performing jazz musician, following in the footsteps of his late father.

Jazz is his birthright. His passion. How could he be so far along in life without “making it”? Or is he just an oblivious fool to the fact that, as a teacher inspiring others, he actually has made it?

One of Joe’s former students recommends him as a fill-in on the piano at the Half Note Club. In the euphoric delirium of finally getting his shot to perform with his heroes on the stage of his dreams, he walks into an open manhole on a busy NYC street.

Life is what happens when you’re busy making other plans.

Joe’s soul is separated from his body, putting him on an escalator to The Great Beyond. He takes a leap of faith and makes it to The Great Before, a realm where souls develop personalities, quirks, and traits before being sent off to Earth.

In The Great Before, Joe is assigned to mentor souls in training. He’s paired up with 22, a soul with who’s wrestled immensely with its very purpose. 22 (as voiced by Tina Fey) is burdened by a defeatist and fatalistic outlook about the very nature of life itself. No one has been able to help 22 find its spark, even when paired with history’s all-time great mentors, from Abraham Lincoln to Marie Antoinette. Though many have tried, these setbacks have prevented 22 from making the leap to earth to experience mortal existence.

When the two are paired up in The Great Before, the begrudging – but so important – soul-searching begins.

Sound like an acid trip? Or like the animated Disney version of a Joe Rogan Experience podcast about psychedelics, interdimensionality, and the multiverse?

It is, but, at least for me, Soul hit all the notes to resonate so much more.

can’t get over the Picasso Jerrys. Or the fact that pop art is so comfortable talking about flow states and the meaning of existence in a family movie these days.

Maybe it’s because both my parents – whom I love very much – are music teachers, filling our home with a deep appreciation for the creative process and live performance? I can certainly relate to Joe (as voiced by Jamie Foxx) in a linear way there. The beauty of jazz is the musically abstract, improvised and meant to be experienced in the moment, yet cooked up with a defined musical structure.

Maybe it’s because I still have no idea what I want to do with my life well into my mid-30s – I’ve just learned that the very premise of that question is a silly one. Life’s about the ride. Maybe it’s because I feel some sort of kinship to Moonwind’s entire energy and vibe? Maybe it’s because Pixar so appropriately named the celestial, Picasso-esque gatekeepers of the universe Jerry, a potential nod to *the* Jerry Garcia, the patron saint of psychedelic asymmetrical life/art experiences.

Soul isn’t afraid of reminding us that life is absurd and laughing at that is part of life’s whole trip, just like Douglas Adam’s calculated that the number 42 is the “Answer to the Ultimate Question of Life, the Universe, and Everything” in Hitchhiker’s Guide To The Galaxy.

Pixar’s first Black-cast-led film checks all the cerebral boxes for me; A profound appreciation for music as a spark of life, the idea of the flow state in the creative process, the fleeting nature of life itself, the philosophical debates between Existentialism – that life itself devoid of meaning, like an empty glass, and must be filled via lived experiences – and Essentialism, that a person’s “essence” already exists out there floating in the ether, one just has to embark on a life-long journey of experiences, open-mindedness, and introspection to find it.

These moments and our way of processing them are like little markers of growth. Life, after all, is growth. You grow or you die. It’s certainly not a crescendo of growth, to some grandiose moment of self-actualization where everything is enlightenment from that moment forward. It’s a journey of growth – the never-ending struggle for growth – like a tree that manages to sprout up after finding roots in the rocks.

A life well-lived is success enough.

It’s really as simple as that.

At the end of Soul, 22 takes the leap. The Jerrys allow Joe to return to his body after he sherpas 22 to find its spark, finally heading to earth to live out a worldly experience in a transient body. Showing his personal growth, Joe gets a second chance at life as he knew it, noting that he’s not sure what he’s going to do on earth but he’s going to “live every moment of it.”

It’s the perfect conclusion. Ending Soul any other way after the journey would be slipshod and pandering.

Soul‘s creators dabbled with other ways of ending the movie. In an exclusive conversation with Den of Geek, Soul writer-directors Pete Docter and Kemp Powers explain some potential Soul alternate endings.

“We storyboarded a bunch of stuff where [Joe and 22] met,” Docter says. “One of them was in New York. 22 was like a student that Joe later recognizes. In another one, she actually ended up in India as a kid living there.” However, Pixar embraced an ambiguity toward 22’s destiny that seems to lend itself just as much to Joe.

Says Docter, “In the end, it’s kind of one of those things where I feel like if the audience falls in love with these characters, I would rather that they have their own answer to where they ended up than trying to provide all those answers for them. For me it’s really a great joy when you can create these things that have a life of their own, that sparks a whole story for someone else.

Glad they settled on how to properly end it, because ending it with a familiar stranger encounter would be campy and cringe-y, at best. Docter and Powers were a little more vague about Soul alternate endings when talking to Collider:

POWERS: The biggest thing was whether Joe lives or dies at the end.

It’s a calculated choice of vocabulary:

‘You know, that line bumps me because it just doesn’t seem real that I could enjoy every moment of my life.’ And so to ‘live it’ does seem more truthful–I might be suffering, I might be said, I might be disappointed, but I’m going to be connected to it. That’s a more realistic goal, I think, for us.”

That’s the perfect way to tie it up into a cosmic bow.

The BroBible team writes about things and stuff we think you want. Occasionally, we write about items that are a part of one of our affiliate partnerships and we will get a percentage of the revenue from sales.