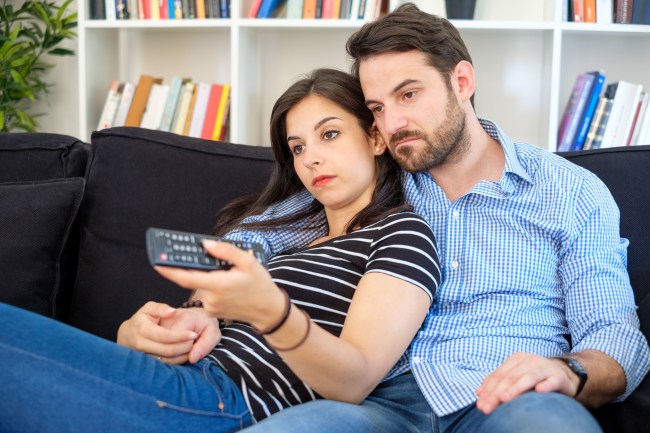 Here’s something we needed today: Onlinegambling.com, a gambling website aggregator, switched things up and knocked together a digital model of how people will look after 20 years of Netflix binging.

OnlineGambling.com commissioned the creation of 3-D models showing the bodily damage binge-watching can do to the human body over time, caused by lack of exercise, a poor diet and a sedentary lifestyle.

“From obesity and posture damage to premature aging and bloodshot eyes, these are just some of the nasty effects this unhealthy lifestyle could cause,” reads an intro to the image series, called “Meet Eric & Hannah: The Netflix Bingers.”

The interactive site offers data on symptoms caused by gorging on TV — including increased risk of bowel cancer, rounded shoulders and poor posture — as well as less-than-reassuring figures about Netflix itself.

Eric and Hannah? No chance. Those two have Duncan and Rita written all over them. Eric and Hannah are upstanding members of society. They watch Norwegian crime dramas and limit themselves to one episode/night because tomorrow is another busy day of civil engineering (Eric) and Pediatricianing (Hannah). Meanwhile, Duncan and Rita have earned the luxury of a 14-episode evening. That’s what you get when you stay ahead on your unemployment filing. Those papers won’t send themselves!

Let’s break these two down. First, they look related as hell. I guess that’s what happens when you give up together—your bodies and faces start to converge. One thing I can’t explain is their tiny little legs. Is this to imply that they’ve shrunk? Has their posture fallen so far that they can now swing their little feetsies while they chow down? Because that seems fine, if not great. I’m a kinetic eater myself—things go down easier when I’m moving. At 6’3”, I haven’t found too many couches or benches that let me swing my legs, but I’ll check Etsy.

The weird part is, they’re not even watching the TV anymore. It looks like they’re just staring at the floor. Maybe they hit one of those “Are you still watching?” moments, and it’s like a staring contest for these two lovebirds, where the first person to move has to pick up the remote and let Netflix know they intend to continue. Stay strong, Duncan and Rita. We’re pulling for you guys.

Terrifying models shows what Netflix addicts may look like in 20 years https://t.co/Q4FY62ywgP pic.twitter.com/24uNkBXM5e