What’s New On Amazon Prime Video In July: ‘All Or Nothing, Beach Bum, The Boys, Hellboy, Shazam!’ And More 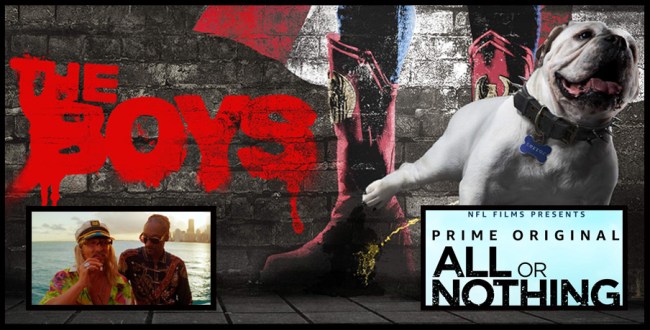 Anyhoo, speaking of the internet and streaming services, check out what’s new on Amazon Prime Video for the month of June 2019.

• All or Nothing S4: Just three years removed from his MVP season, quarterback Cam Newton remains the charismatic star around whom the Panthers revolve. His cast of teammates includes dynamic running back Christian McCaffrey and perennial All-Pro linebacker Luke Kuechly, along with a mix of talented rookies hungry to prove themselves and several veteran stalwarts who know this season might be their last.

• Comicstaan S2: Comicstaan is back with a brand-new season! Aspiring comedians from all over India compete to see who will be the future of funny. New contestants, new judges, new everything. Find out who will be this year’s next big comic sensation!

• Dino Dana S3: The Dino Dana family is expanding! This season, Dana becomes a big sister when her brother Dexter is born. Having a new baby around is life-changing but that’s not all that’s new for Dana. This season she encounters her very first Terror Bird, the Titanis, the world’s smallest and cutest sauropod, the Europasaurus, and she learns that baby mammals are a lot alike when a dino experiment has her taking care of a baby Mammoth and Dexter. With plenty of new dinos and new humans, Dino Dana Season 3 is fun for the whole prehistoric family!

• Kung Fu Panda: The Paws of Destiny 1B: Now famously known as the Four Constellations the panda kids are summoned by the Emperor to the Forbidden City, making Po fear the kids might not need his teachings anymore. But when friends turn to foes, all our heroes will need to draw from their Chi and all their Kung Fu knowledge to defeat evil in an explosive and epic battle.

• Peterloo: Internationally acclaimed and Oscar-nominated filmmaker Mike Leigh portrays one of the bloodiest episodes in British history, the infamous Peterloo Massacre of 1819, where government-backed cavalry charged into a peaceful crowd of over 60,000 that gathered in Manchester, England to demand democratic reform.

• The Boys S1: In a world where superheroes embrace the darker side of their massive celebrity and fame, The Boys centers on a group of vigilantes known informally as “The Boys,” who set out to take down corrupt superheroes with no more than their blue-collar grit and a willingness to fight dirty. The Boys is a fun and irreverent take on what happens when superheroes – who are as popular as celebrities, as influential as politicians and as revered as Gods – abuse their superpowers rather than use them for good. It’s the powerless against the super powerful as The Boys embark on a heroic quest to expose the truth about “The Seven,” and Vought – the multi-billion dollar conglomerate that manages these superheroes.

In addition to Amazon Originals, new films joining Prime Video in July include The Haunting of Sharon Tate starring Hilary Duff and available the Monday after the theatrical release of Quentin Tarantino’s Once Upon a Time… in Hollywood, The Beach Bum starring Matthew McConaughey, Serenity also starring McConaughey as well as Anne Hathaway, Under the Silver Lake starring Andrew Garfield, A Vigilante starring Olivia Wilde, and Arctic (2018) starring Mads Mikkelsen.

Additionally, oldies but goodies coming to Prime Video in July include Rosemary’s Baby, Star Trek VI: The Undiscovered Country, and Dumb and Dumber.

NEW IN JULY – AVAILABLE FOR RENT OR PURCHASE ON PRIME VIDEO