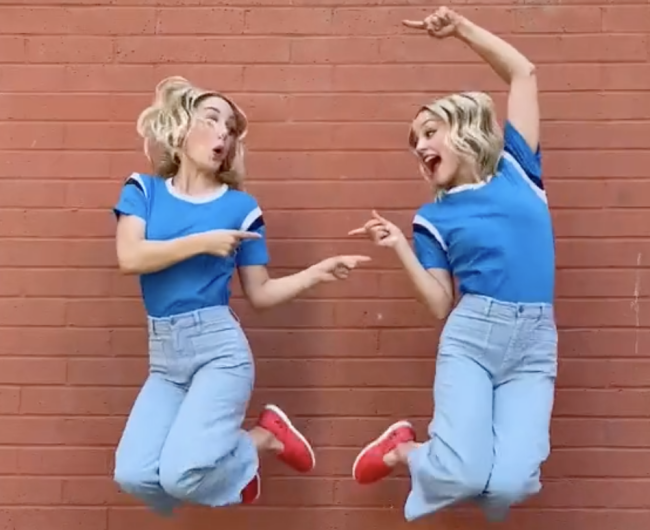 When you click on one of Kelli Edrmann’s (@HappyKelli) videos on TikTok, you might find yourself with a lot of questions. How is she such a good dancer? How does she come up with her ideas?

The big question is — How do her videos look the way that they do and how does she stay so still and in-sync? Take this one, for example:

Oh no I hope I don’t…. #happykelli #strut #colors #satisfying 😎

Well, the short answer is that it kind of happened overnight.

Who is Happy Kelli?

Kelly Erdmann is a 29-year-old social media personality, professional dancer and choreographer, and an actress. She hails from Marysville, Washington but lives in Los Angeles.

As a kid, Erdmann trained in ballet, jazz, contemporary, lyrical and hip hop, with hopes of pursuing her dream of dancing. At 18, she moved to L.A., joined the EDGE Performing Arts Center scholarship program and signed with Bloc Talent Agency.

Erdmann has performed in Wicked on Broadway, NBC’s Hairspray Live!, and recently danced alongside Carly Rae Jepsen in the music video for her song “Too Much.” She has also made appearances in episodes of Glee, The Middle, Jane The Virgin and commercials for Samsung, T-Mobile and Crocs, among others.

Her recent success, however, has come through social media — specifically on TikTok.

When and how did she become famous?

When the COVID-19 global pandemic hit in March of 2020, Erdmann had the stars align. She is not only a great dancer with lots of time on her hands, but her husband, Freeman Butler, knows a thing or two (that’s an understatement) about video editing.

It started off small but took off very quickly. Specifically, she and her husband were enamored by a trend that incorporated sticker cutouts into live action movements.

They decided to give it a shot:

this took hours it make. It only takes a second to like it 🙏 #foryourpage #fyp #follow #dance #crocs #buttercup #quarantine #lockdown

With only 12 total followers at the time, Erdmann posted the video. It went viral over night and by the next morning, the video had 200 thousand views. Now it has more than 2.8 million.

Energized by the virility, Erdmann and Butler decided to use the videos as a way to bring positivity to people during a difficult time. Hence the tag @HappyKelli. She (in her videos, at the very least) is always happy.

So after the first one took off, they posted another and BOOM— it went viral again. It’s not hard to see why because it’s awesome.

It took even more hours it make this one. Liking only takes a second.🙏#crocs #ddr #quarantine #fyp u/chanchicachan

They decided to step up the editing to a new level and it worked.

The ending is weird, I know. But hope you enjoy! #skibidi #danceindia #coronavirus

As the views, likes and followers began to skyrocket, so did the creativity.

The ending is weird, I know. But hope you enjoy! #skibidi #danceindia #coronavirus

After a quite few videos with hundreds of thousands of views, the occasional video would cross into the millions threshold.

Here are a few examples of the early videos that really took off:

Didn’t turn out exactly how I envisioned. Someone do this but better! #boxchallenge inspo @spongebob

I had to stare at the screensaver for hours to get this. It only takes a second to like 🙏 #theoffice #dvdchallenge

How many kellis are there? Inspo: @funny_show_funny #foryoupage #ShowAndTell #vibin

Everything that they touched turned to gold and they began to build a base for the future.

After finding success with videos that were posted primarily from inside, Erdmann and Butler started taking their videos to the streets. Ultimately, they landed on one particular style of editing.

As Happy Kelli dances, her body seems to stay in the same place. It’s mesmerizing and their first video did nearly two million views.

Trust me, wait til the end. Finally did this trend (with a twist). #hoodbaby #buttercup #dance #happy DC: @smacmccreanor

Take a look at how the video was shot versus how it was edited:

At that point, her profile growth only trended upward as she continued to experiment. Behind the scenes videos did just as many (if not more) views than her originals.

♬ Get Down on It – Silver Disco Explosion

Reply to @judgeofcinema you’re too nice. Here’s the original side by side 🙂

If I was green I would die #imblue #imbluedabadeedabadie #fyp

Her ability to combine viral trends with great dancing and unique editing began to really make waves. This video did 2.7 million views:

anyone else obsessed with this song? DC: me #ddr #crocs #dance #dancinginmyroom

These videos each topped the one million mark by a significant margin.

♬ Pump Up The Jam – The Hit Crew

Her videos were unique and something that TikTok hadn’t really seen before.

Things really went crazy when Kelli hopped on the PiuPiu Dance trend. As she and her friend (@kausha_campbell) danced, their positioning didn’t move.

To do so, Butler zoomed in on the original video and used keyframes to keep their heads in the same spot. This was the video that saw everything change as it did 12.9 million views:

As they say, the rest is history. Every video since has done at least one million views. They found their niche and owned it.

In honor of the first one hitting 10 mil (wow)! also the only way I could get him in front of the camera 🙂 DC: @ezuz_official #ezuzdance

As the success continued, Kelli’s good vibes and happiness paired perfectly with even bigger and bolder edits. You can’t not smile and you can’t not watch it more than once.

Eventually, other famous dancers, collaborators and her friends hopped in the videos with Kelli. Derek Hough, for example.

Most recently, former NBA player Richard Jefferson recognized Kelli on the streets and asked to get in on the action.

Was this the best comeback of his career? lol #2016cavs #richardjefferson #happykelli #storytime

♬ Be My Lover – La Bouche

Today, as of September 1, 2021, @HappyKelli on TikTok has 2.9 million followers on the platform. Her content only continues to impress and her daily happy vibes continues to bring exactly that.