Why Are There Bats On The New Quarter? Conspiracy Theorists Think The Government Plot Against Society? 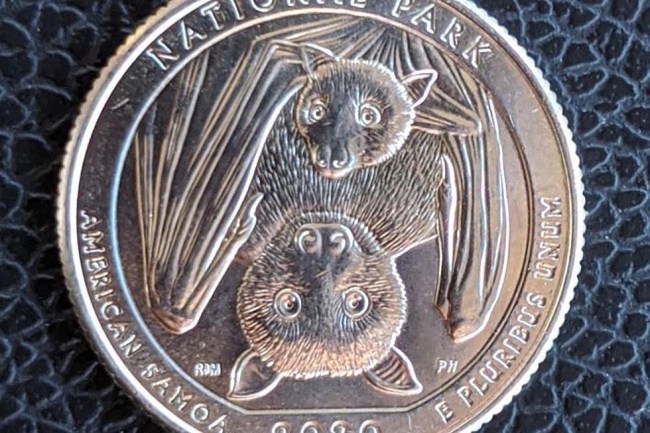 It was just your run of the mill Friday afternoon. I was sitting at my desk, finishing another loud-mouthed column for the nation to disregard when my computer let me know that it was time to take a beer break. It does this on occasion by flashing an icon at the top of the screen, saying that it needs a software update. If you ask me, it really only does this to keep me from rewriting the same godforsaken sentence over and over again. But who am I to stand in the way of progress?

“Fine by me,” I thought. I was getting thirsty anyway.

So I grabbed a homebrew from the fridge and then sat back down while the computer did its thing. That’s when I spotted some spare change showing through a stack of bills and post-it notes. Now, loose change doesn’t usually give me a boner. But considering that I haven’t exactly been raking in the big bucks this summer, it felt like I hit the jackpot. But more curious than finding a couple of quarters was their design. The coins had two bats engraved on the back of them, and they weren’t just waiting to shapeshift into vampires. It was far stranger than all of that.

There are several conspiracy theories floating around for why in hell’s holy name the U.S. government branded the new quarter (released in February 2020) with two Samoan fruit bats. While some are more extreme than others, they all center on the idea that COVID-19 is all part of a government plot to infect its own people and whittle down the population.

Sure, there are some who think the virus is actually a bioweapon created by China, perhaps released into the world to wreak havoc on the 2020 presidential election. It’s a theory that at least has some bearings. After all, the last thing China wants is another four years of Trump’s tariffs, so if it takes sending over a vicious bug that makes the voters either dead or turns them against him, so be it. But there’s another group that thinks the bat quarter is actually Uncle Sam being a dick, using symbolism and his dark powers in the basement of the U.S. Mint to show Americans that they are being controlled by germ warfare. The theory is that since Americans are being told the virus came from bats, the government stuck a couple of them on a quarter to taunt the woke.

But come on, why would they want to kill us?

Well, supposedly, it is an effort to get rid of the weak (the sick, inbred, Walmart shoppers, etc.) and contribute to the uprising of a new world order. The rich and powerful have presumably had enough of this impoverished America crap, and they are taking the country back once and for all.

Sounds crazy, right? Sure it does. But then again, this is 2020 – an age when asteroids seem to be buzzing the planet almost every month, when UFOs are showing up at a higher frequency than ever, and the cast of Seinfeld keeps dropping dead. So, maybe the theory isn’t too far-fetched.

Yet after conducting more research, I found out what was really going on. Although these conspiracy theories are entertaining as hell, the real reason there are bats on quarters isn’t to reveal an evil plot. The coins are apparently part of the America the Beautiful Quarters Program. It’s an initiative that instructs the Mint to spend the next decade paying homage to national parks or other national sites from each state, the District of Columbia, and all U.S. territories.

The program, which was approved by Congress in 2008, requires the release of five new quarters every year with the final coin to hit circulation sometime in 2021. The new bat design has been in the works since 2019 and is representative of the National Park of American Samoa – the only U.S. territory where this bat species is found. Oh yeah, and those bats aren’t boning each other either. The image is actually a mother hanging in a tree looking after her pup. Jeez, what would Freud have to say about my triple-X interpretation? Probably that I just need to get laid.

But, Mike, it’s not just a coincidence that these bat quarters came out a month before the bat-bred virus struck the nation down. Well, as much as I enjoy a good conspiracy theory and as much as I’m still not convinced that this COVID deal isn’t a bioweapon of some sort, its connection to the quarter is a stretch. For starters, there’s still no definitive evidence that COVID originated from bats. Chinese researchers found a high probability that the virus came from horseshoe bats, but there’s still enough of a dispute to remain skeptical. It’s possible the disease manifested in some other animal and evolved over the decades to what it has become today.

It also seems unlikely that the Illuminati or whatever sicko secret society is supposedly behind this conspiracy would use the U.S. Mint to reveal their devious plot to wreck life as we know it. No, I’m afraid the bat quarter is just a coin and not some smarmy, coded message suggesting that we’re all screwed.

But that doesn’t mean the virus WASN’T scientifically engineered and unleashed into the world to satisfy some organization’s wicked agenda. It just means that all of the twisted evils operating in the shadows probably aren’t going to be revealed on a coin. Or maybe that’s the whole trick. I mean, have you ever wondered why there’s a pyramid on a dollar bill when there aren’t any pyramids in the United States? What’s that all about, huh? You know what I think? I think it is a nod to the aliens, the real controllers of planet Earth. Perhaps COVID-19 IS the aliens – did you ever think about that? Maybe we’ve already been invaded, but we’ve been too programed by the Independence Day imagery created by Hollywood to realize it. Or perhaps this is just me trying to get another humdinger of a conspiracy theory to go viral. That’s up to you to decide.