Why Are There So Many More UFO Sightings in 2020 Than Ever Before? 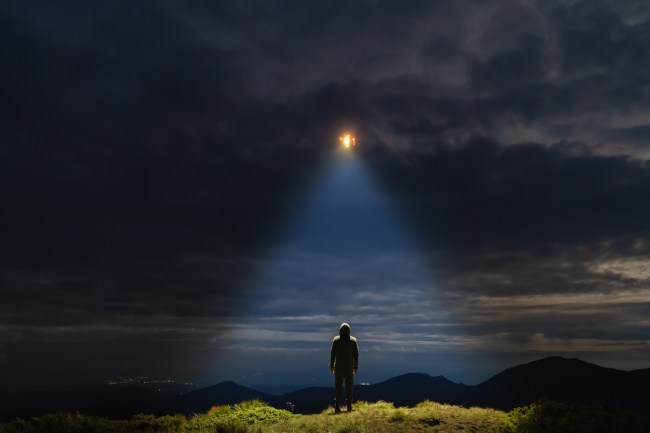 Whatever you do, don’t believe anything you read from this point forward. Well, except for this. This, you can bet, is about as real as it gets. You see, while the United States has been trying to survive the pandemic and every awful thing that it comes with, there has been a wicked uprising of alien spacecraft swooshing all around the planet. No joke. To those not paying any attention, the situation in the sky, well, it probably doesn’t look much different than any other time. But for those who have their eyes open to the UFO phenomenon, there is no doubt about it, more reports of unexplainable spacecraft have surfaced this year than any other since we’ve been alive. And if you dig a little deeper, there is plenty of evidence of this.

Hell, New York alone has had nearly 185 reports of UFO activity in the past 10 months. That’s a substantial increase considering the state only had 151 in all of 2019. So I guess what we’re trying to say is, batten down the hatches, America!

We could be under attack.

For decades now, non-believers have chalked up all of the nation’s UFO sightings as just being super-secret military operations testing the latest war machines. And while some of these sightings could be just that, the government’s latest reveal pretty much ensures that not every mysterious flying saucer is the military. Just months ago, after previous reports suggested that the nation’s UFO Program had been shut down, the Pentagon revealed that it still had a department dedicated to getting to the bottom of these encounters. The DOD didn’t come right out and say that this project was geared toward sniffing out aliens if and when those beady-eyed bastards dared infiltrate the nation, but we can read between the lines. Oh, yeah, you better believe we can! Especially considering that three recently declassified videos captured by military pilots show what appears to be UFOs performing aerial feats that no aircraft design of this planet could ever achieve. And the Pentagon even admits it has proof of “off-world vehicles not made on this earth.”

So if this spacecraft wasn’t made on this planet, who made them and where in the Devil’s name did they come from?

The situation regarding the potential for sophisticated alien life has created enough nervous noise to get Congress’ panties in a wad. It is now pressuring the Pentagon and the intelligence community to cough up more information. If aliens are real, well, they feel like Americans should know about them.

It used to be that people thought a person was crazier than a shithouse rat if they admitted to seeing a UFO. But now, UFOs are mainstream. Not only has the United States experienced more sightings than ever before, but so has Canada, Belgium and Russia. “We’re looking at increases of about 50 percent from this time last year, Chris Rutkowski, a UFOlogy researcher in Canada, told CTV News.

To that end, Japan recently demanded that military pilots report all UFO activity. It seems that nations are starting to suspect that something is up, and they want to be prepared for whatever it is.

Some naysayers of intergalactic controversy believe that people are only seeing more UFOs this year because they’ve got plenty of time on their hands. The theory is that the lockdowns brought about by the COVID debacle has given more people the opportunity to be perceptive of the air above.

A recent report from the Wall Street Journal suggests that Americans are now looking for UFOs more than they are doing things like bird-watching. Well, yeah. We already know that birds are just governmental machines set out into the world to spy on us. But UFOs, well, they are still enigmatic. Because of this newfound interest in aliens, the United States has had somewhere around 5,000 sightings this year – 20% of which happened in April when all of the lockdown business began. So, maybe we are really just bored and looking for something to keep life interesting.

As it stands, there isn’t a database anywhere in the world dedicated to gathering these kinds of reports. Not even the Pentagon has come out yet and admitted to having a list of when and where UFOs have shown up in the United States. So, we can’t really clarify whether more alien spacecraft is actually hovering above Earth or not, but, you know, that’s probably what’s happening.

The National UFO Reporting Center, which is not funded by the federal government but does collect limited data on UFO sightings nationwide, shows in influx in activity in parts of the country. And so does the news for that matter. Hell, just do a quick Google search for UFOs, and you’ll be presented with a variety of new, wild reports suggesting that an alien invasion could soon be near.

So, we shouldn’t be surprised if aliens do swoop down from the heavens and make themselves known to the masses. And don’t be frightened of it either. Something like that might just be what the world needs to turn off the arrogant, politically, and religiously charged foolishness that is seemingly driving all of humanity off a cliff and into a darkened cesspool of rotten oblivion. Perhaps the reason we’re seemingly bearing witness to more UFOs now than ever before is that the alien masters of the universe have realized that their little science project (also known as humanity) has gotten too big for its britches, and they are just waiting for the perfect time to blow it to smithereens. Considering all that we’ve experienced in 2020, don’t think it’s beyond the scope of reason. Some reports have suggested that the planet should start planning now to protect itself from the prospect of an alien invasion. But we’re here to tell you, there’s no use. Nope, any interstellar civilization that has created technology vastly superior to our planes, Apollos, space shuttles, and iPhones that can just scoot in and out of the galaxy like it’s nothing at all will undoubtedly whoop our patriotic asses right into next week.