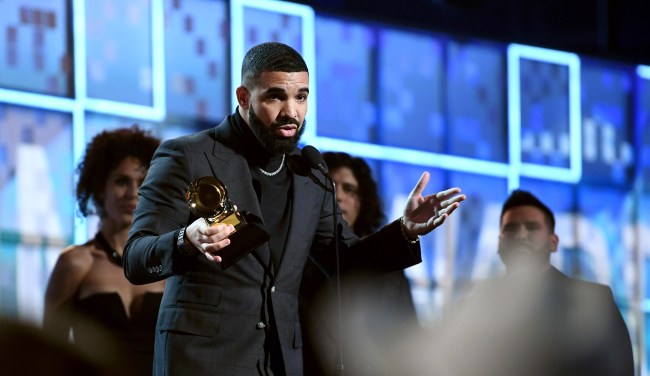 In one of the more controversial moments of the 2019 Grammys, Drake was cut off during his acceptance speech after winning Best Rap Song for “God’s Plan” and people wanted to know why.

Was it because Drake threw a little shade the Grammys’ way after being nominated 42 times, but winning just four times?

“This is he first time in Grammy history where I actually am who I thought I was for a second, so I like that,” Drake began his acceptance speech.

“To the kids watching, those aspiring to do music, and all my peers that make music from their heart, that do things pure and tell the truth. You know we play in an opinion-based sport, not a factual-based sport. It is not the NBA… This is a business where sometimes it is up to a bunch of people that might not understand what a mixed race kid from Canada has to say… or a fly Spanish girl from New York, or a brother from Houston right there, my brother Travis [Scott].

“The point is, you’ve already won if you have people who are singing your songs word for word, if you are a hero in your hometown. Look, if there is people who have regular jobs who are coming out in the rain, in the snow, spending their hard-earned money to buy tickets to come to your shows, you don’t need this right here, I promise you, you already won.

And that’s when his microphone was shut off and the show went to commercial.

Many of those watching assumed that Drake got the hook because the show’s producers felt he was about to go off on the Grammys just like he did in 2017 when he said in an interview, “Even though ‘Hotline Bling’ is not a rap song… the only category they can manage to fit me in is a rap category. Maybe because I’ve rapped in the past or because I’m black, I can’t figure out why… I won two awards last night— but I don’t even want them, because it just feels weird for some reason.”

After the show, the Grammys claimed that was not the case.

“During Drake’s speech, there was a natural pause and at that moment the producers did assume that he was done and then cut to commercial,” said a representative for the Grammys. “However the producers did speak with Drake following his speech and did offer him to come back on stage to finish whatever his thoughts were. But Drake said he was happy with what he said and didn’t have anything to add.”

Right… and if you believe that, there’s a bridge in Brooklyn I’d like to sell you.