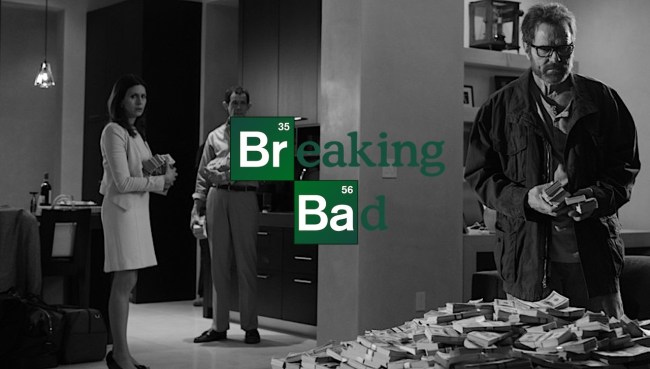 Over the course of Breaking Bad, Walter White completely transforms from meek Sophmore science teacher to a modern-day John Dillinger in the span of just a year.

On the surface, Walt’s motivations seem relatively simple: following his lung cancer diagnosis, he’s worried about leaving his family — a wife, a disabled son, and an infant daughter — behind in self-described financial ruin. While becoming a meth slinging drug kingpin wouldn’t necessarily be your or my first move, his motivations in doing so were at least comprehensive on the surface.

However, as we now know, the reasons behind Walt’s devolvement into the darkness are far more complicated than simply wanting to provide for his loved ones.

Prior to his middling career as an underpaid chemistry teacher, the mythology of Breaking Bad suggests that Walt was quite possibly one of the finest scientific minds in the United States, as he not only co-founded a future billion-dollar company while in grad school but was awarded a Nobel Prize when he was just 27-years-old.

That company — Gray Matter Technologies — was founded by Walt and his college friend Elliott Schwartz. While working at Gray Matter, Walt was dating his chemistry partner and lab assistant Gretchen, who — according to the actress who played her — was essentially ready to marry Walt.

However, upon meeting Gretchen’s extremely wealthy family, Walt has a crisis of inferiority, as he not only abruptly leaves the family gathering but breaks up with Gretchen and leaves Gray Matter as a result.

Speaking to AMC back in 2009, Jessica Hecht — the actress who played Gretchen — said that’s exactly what series creator Vince Gilligan told her prior to shooting the pair’s famous season two restaurant scene:

“Vince Gilligan told us exactly what went down between the characters off screen: We were very much in love and we were to get married. And he came home and met my family, and I come from this really successful, wealthy family, and that knocks him on his side.”

“He couldn’t deal with this inferiority he felt — this lack of connection to privilege. It made him terrified, and he literally just left me, and I was devastated.”

Hecht wasn’t the only person involved with Breaking Bad to elaborate on this revelation, as Gilligan confirmed her statements during in an interview with HuffPost, calling her analysis of the situation “correct”:

“She’s correct, and that’s what I explained to her and to [Bryan Cranston] before they shot that big scene between the two of them where they were at the restaurant,” Gilligan told HuffPost.

“Most viewers of Breaking Bad assume Gretchen and Elliott are the bad guys, and they assume that Walt got ripped off by them, got ill-used by them, and I never actually saw it that way.”

“I think it was kind of situation where he didn’t realize the girl he was about to marry was so very wealthy and came from such a prominent family, and it kind of blew his mind and made him feel inferior and he overreacted. He just kind of checked out. I think there is that whole other side to the story, and it can be gleaned.”

That — that right there — is the genesis of Heisenberg, the core and soul being of Walter White: the man’s defining character trait is ego, and it’s that wildly dangerous ego that led him down the path of meth, death, and destruction.

Not only did Walt’s ego drive him to walk out on his supremely intelligent and attractive girlfriend, but it led him to force his way out of a company that he would later consider to be “his potential” and his “son’s birthright”, selling his shares in the multi-billion dollar enterprise for just $5000. As he once tells Jesse, “pennies on the dollar”.

By the end of the series, Walt at least eventually reckons with his own personal shortcomings, finally admitting to his devastated ex-wife Skyler that he hadn’t gone into the meth business for the betterment of his family…. but simply because he liked it, and he was good at it.

Walter White walked away from his life’s work due to ego, and as a result, he paid for it with death.