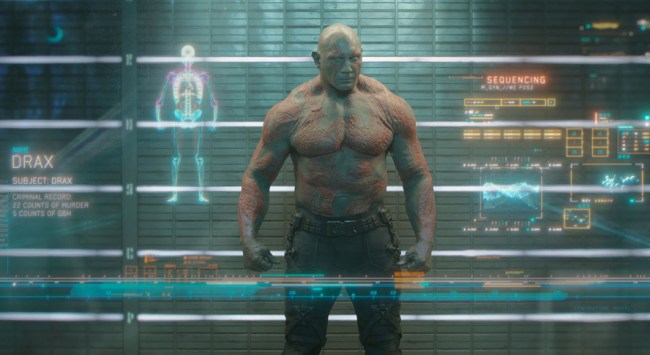 Avengers: Infinity War left us with so many questions. Where is Gamora? Did anyone else in the MCU that wasn’t in the movie also get zapped by the snap? (Jeff Goldblum says The Grandmaster is still alive.) Why couldn’t Bruce Banner Hulk out? (We actually got the answer to that question.) And most importantly, why did Drax think that if he was “incredibly still” it would make him invisible?

Infinity War directors Anthony and Joe Russo were no help when asked whether Drax was really affected by Thanos or was he simply standing so still that he became invisible?

“That’s a spoiler,” Joe Russo joked to The Huffington Post.

“That’s to be decided,” said a laughing Anthony Russo. “All we know is what we can gather from the film. Anything more than that can potentially be addressed down the line.”

Not funny, guys. After all, this is the guy who dropped this one-liner on us.

So, back to why did Drax think that if he was “incredibly still” it would make him invisible? One smart person on Reddit thinks he has it figured out and I have to say, I agree with him.

It all has to do with these two scenes.

I believe that Drax thinks he can’t be seen if moving slowly because, like the T-Rex from [Jurassic Park], he has horrible eyesight and can’t see things that are moving extremely slowly.

As evidence, we are shown at least two instances from the Guardians of the Galaxy movies where Drax is unable to perceive something that isn’t moving/barely moving.

1. Guardians of the Galaxy – During the end credits when Baby Groot is dancing to the music and Drax is sharpening his knives, Drax turns to Groot and Groot stops dancing. Drax doesn’t seem to have noticed Groot and goes back to his knives. Groot starts dancing again and right as Drax appears to notice, Groot stops. Again, it looks like Drax doesn’t really notice anything.

2. Guardians of the Galaxy Vol. 2 – During the opening title sequence while the Guardians are fighting the inter-dimensional squid thing, Baby Groot is dancing to music again. During the sequence Drax gets tossed by the squid and lands directly beside Groot. Groot is still dancing, but stops when Drax turns towards him. Drax doesn’t seem to notice him and begins to look away. Groot starts to move and Drax snaps his gaze back towards Groot, but Groot stops moving and again Drax doesn’t seem to notice him.

In both of these instances when Drax catches Groot moving, Groot stops and it looks like Drax can’t see him. If you go back and rewatch the scenes, it almost looks like Drax is looking through Groot, like he knows something is there but he can’t quite tell what it is.

Now, as for how long Drax can stay invisible, the man who plays him had that answer.

So now we know.