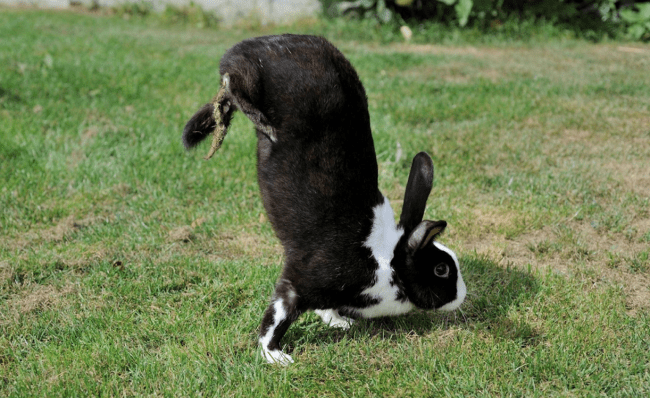 The French “sauteur d’Alfort” or “Alfort jumper” variety of rabbits have been doing handstands and walking around on their two front legs since at least 1935.

Yes, that is weird.

Almost a century later, geneticists at the University of Porto in Portugal believe they have finally figured out why, and, as it turns out, calling the rabbits mutants actually isn’t that far off.

It is now believed that the rabbits, who when moving at slow speeds act basically normal, walking on all fours, transition to the handstand position when they are startled or in a hurry because of a genetic mutation.

“The strain has been kept since then to study ocular malformations and pathological locomotion,” co-author of the sudy Miguel Carneiro, a geneticist at the University of Porto in Portugal, told Gizmodo. “Rabbits carrying this mutation would not be able to survive long in the wild due to its deleterious effects.”

The study, published in PLOS Genetics, states that it all comes down to the rabbits’ DNA.

“With modern technology, it’s straightforward to go from a simple recessive disorder to finding the genes,” co-author Leif Andersson, a geneticist at Uppsala University in Sweden, said in a video call. “The expectation was there was something wrong with the spinal cord, because they don’t coordinate their forelegs and the hind legs.”

Among the Alfort jumping rabbits (perhaps a misnomer, given the bunnies have no hops), this was proven true. The RORB protein is a transcription factor, meaning it has a hand in a number of genes, which all end up being expressed in traits. The proteins are ordinarily produced in inhibitory interneurons that cease communications moving through the body. (Imagine an operator refusing to service your calls.) In the weird-walking rabbits, the interneurons either were less present or completely absent, and, in the latter case, the rabbits would overflex their hind legs, rendering them incapable of hopping.

“What’s happening when you’re moving is that you have these neurons firing all the time, and they coordinate muscle contractions and receive feedback on the balance of the different limbs,” added Andersson. “This coordination of muscle contraction is not correct in these rabbits.”

So the rabbits, who apparently do not suffer any physical pain because of the genetic mutation, walking on their front legs is not the mutation itself, but merely a reaction to it.

The researchers say the knowledge accumulated from this study can now be used to create a better understanding of how locomotion is controlled in vertebrates.