Wife Leaves Dishes, Laundry For Her Husband To Do, For Days, Chronicles It In Relatable Twitter Thread 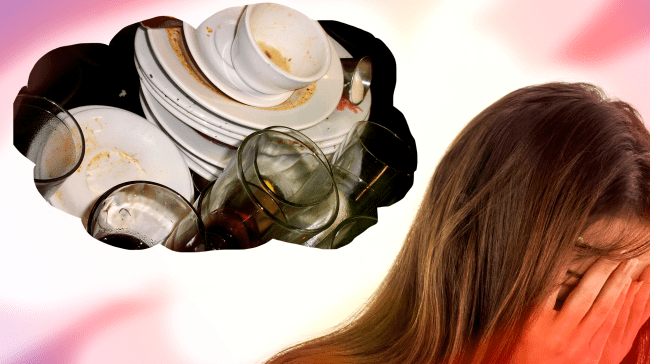 Have you ever gotten so fed up with doing certain chores and other things around your house that you feel others in the household should be chipping in and doing a little more of their fair share of the work?

I know that I have done this with my kids, leaving the dishes to pile up in the sink or letting the garbage can in their bathroom overflow with trash in the mere hope that one of them will eventually get the subtle message. (They usually don’t.)

One British wife who was feeling that same way recently went on a “cleaning strike” leaving the dishes and laundry for her husband, who she believed to be slacking around the house, and ceasing to do several other small household chores.

Days later, none of those things had yet to be done by her husband, who she refers to as “Irish” in some tweets, not even her kids.

The woman, who goes by Miss Potkin on Twitter, chronicled those days in a very comical Twitter thread.

Two days ago, I decided to stop doing the dishes. I make all the dinners and I am tired of having to do all the cleaning too. SINCE THEN this pile has appeared and at some point they are going to run out of spoons and cups and plates.

Who will blink first? Not me. pic.twitter.com/IZkOwP3a6B

Day 3 - they’ve used the last of the big bowls and they’ve run out of spoons. No one is saying anything about the big pile but I can hear their brains ticking. No, family, I will not be loading the dishwasher today.

At that point she believed there was some “movement” taking place as someone finally emptied the trash. Alas, that was as far as it went.

Spoke too soon. Irish has resorted to making tea with the baby’s weaning spoon and it using the emergency cup. pic.twitter.com/BMR6kuXLzs

Let me know when you want to talk about the fact that I stopped doing the laundry too. It’s getting a bit post apocalyptic. The piles are everywhere. pic.twitter.com/9NEUIVExwE

Things are really starting to get bad now.

“There is a pan on the cooker with a single sausage in it. It’s been there for two days,” she writes. “I can’t look at it because it’s turned the colour of the man that washes up in Cast Away.”

SOMEONE JUST FORGOT THAT THERE’S NO TOILET ROLL IN THE DOWNSTAIRS LOO. Omg this is exciting.

God give me strength. pic.twitter.com/Sp5870VmcV

Q - Do I switch on the dishwasher? It’s killing me. Knowing the dishwasher is full but just sitting there is KILLING ME. pic.twitter.com/2fXovlwpIR

At this point, she started to get comments disparaging her for having such a messy house, completely missing the point.

“I see that judgey f***ing Twitter has woken up so let me say this once and be clear – We do not ‘live like this’,” she write. “This is a lesson in wanting to be heard and respected and not having to repeat yourself when things slip. We’re navigating the day-today in extraordinary times and for me, the past two days have been funnier than anything else. I think we’re all entitled to run our own experiments, be amused, push a situation to its limit if we so choose. No one needs to be lectured by those that have failed to see the silly joy in what’s happening here.”

4:41pm The dishwasher still isn’t on. The stress.

Dinner is happening. I have used two pans and one knife. The last knife. I’ve got 3 more pans and then it’s baking sheets 🙁

Me: Did you not want to switch the dishwasher on earlier?

Irish: I ran out of time

3 days. 3 days of not washing or picking up or tidying. 😂

WE MADE IT! (I’m not doing that again) pic.twitter.com/3UK3mSD59A

“You’re gonna have good days, bad days, and a lot of f*** it days, but people don’t like being taken for granted, especially by the ones they love the most. Period,” she closed out her thread.