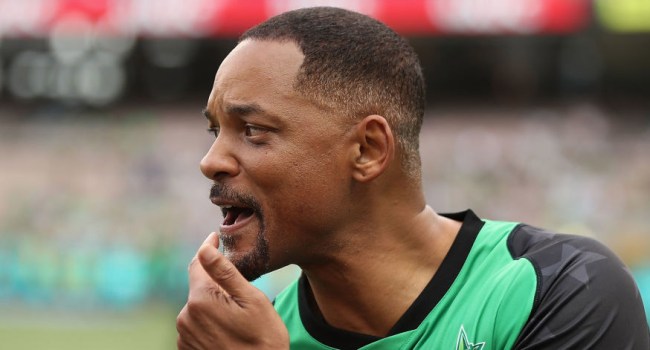 Today the internet got its first look at Will Smith as the genie in the upcoming Disney live-action remake of Aladdin and people really, really do not like it.

To begin with, a lot of people are not down with all of the live-action remakes Disney is doing with so many classic cartoons like The Lion King, Mulan, Beauty and the Beast, and the like.

So, some people are going to hate Guy Ritchie’s upcoming live-action Aladdin remake just on principle.

However… you definitely do not have to be one of those people to dislike, or make fun of, Will Smith’s look as the genie. Because… wow… it’s really something.

A whole new world. Check out the exclusive first look at Disney’s #Aladdin on the cover of the newest issue of @EW! https://t.co/7xLw0ZDtJc pic.twitter.com/C50SvXwBVg

As you may recall, in the animated version of Aladdin, Robin Williams played the genie, and well, he was as incredible as Robin Williams almost always was. So, in an effort to be different, this is what they came up with. Sigh…

“I think it’ll stand out as unique even in the Disney world,” said Smith, about his character. “There hasn’t been a lot of that hip-hop flavor in Disney history.”

Oh, it’s unique all right. Just check out these reactions…

Will Smith’s genie hair in the live-action #Aladdin is going to be a major source of anxiety for me in 2019. pic.twitter.com/FwG44LHiUj

CANT FUCKING LOOK AT WILL SMITH’S GENIE WITHOUT LETTING OUT A LITTLE SNORT LMAO THAT BEARD AND THAT BUN pic.twitter.com/FEkArQDiZm

What could Will Smith possibly have done to deserve this? Jada is gonna have to do a whole episode of “Read Table Talk” about this hair piece. pic.twitter.com/wMm5fysIg0

*upon seeing Will Smith as Genie for the first time* #Aladdin pic.twitter.com/uLpMzwE38P

What is this. Why isn't the Genie Blue unless this is the ending where the genie becomes human. Aladdin Director there's a thing called CGI use it on Genie or make it practical.
https://t.co/plU6sETLMW

A splash of blue 🙂 #Aladdin pic.twitter.com/n2rmaaUxy0

it's not too late to salvage this pic.twitter.com/wuh7b3IOMk