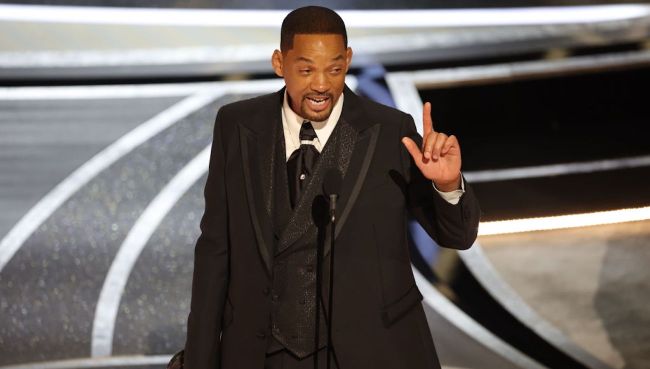 Following his infamous slapping of Chris Rock that completely tanked and overshadowed what should’ve been a career-defining moment, Will Smith’s Q-score — which is basically the Hollywood term for “approval rating” that measures a celebrity’s marketability — has been “severely damaged”, according to a new report from Variety.

Instead of having the 2022 Oscars be the night that Smith crowned his three-decade-plus long career with a Best Actor victory, the night will now be remembered as arguably the worst of Smith’s career.

According to Variety, prior to “the slap” “Smith consistently ranked among the country’s top 5 or 10 most positively rated actors in Q Scores’ semiannual surveys,” alongside the likes of Tom Hanks and Denzel Washington. Since March 27, 2022, though, that’s all changed.

But between Q Scores’ January survey, conducted before the Oscars, and its July polling, the first following the slap, Smith’s positive Q Score plummeted from a stellar 39 to 24, which Schafer characterized as “a very significant and precipitous decline.” (A positive Q Score of 24 means 24 percent of those surveyed who know of Smith count him as one of their favorite personalities.)

At the same time, Smith’s negative rating (those surveyed whose opinion of him was “fair” or “poor”) more than doubled, from less than 10 to 26. The average negative Q Score, according to Schafer, is about 16 or 17. [via Variety]

Despite Smith’s career speed bump, the actor will return next year in Antoine Fuqua’s AppleTV+ slavery drama Emancipation, which is rumored to be his best work since Training Day over 20 years ago.

RELATED: Zoe Kravitz Regrets Calling Out Will Smith After It Almost Resulted In Her Cancelation