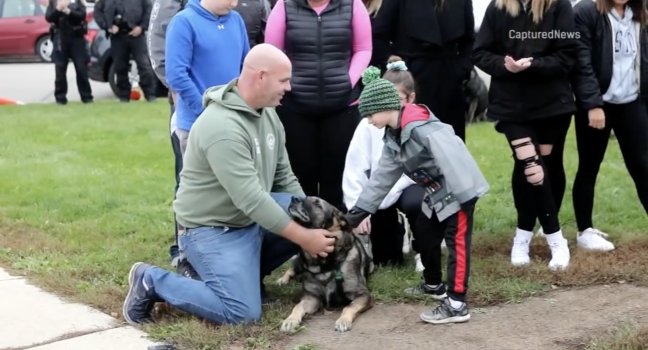 A local Kenosha, Wisconsin police dog is being called a hero after taking a bullet to the head from a Chicago murder suspect last week. That term is absolutely the correct one!

Deputy Terry Tifft and his 8.5-year-old German Shepard K9, Riggs, were on the scene last week after Chicago police tipped off deputies about a murder suspect in the area. The suspect was linked to the murder of two men, and stole the second victim’s car.

As deputies arrived to confront the suspect at a gas station, the man ran off while holding a gun. Riggs leaped into action.

Riggs, who chased after the suspect, took him down as he was approaching the nearby highway. At that point, the man shot Riggs once in the forehead and wounded him.

Two deputies then fired on the man and took him into custody. The heroic K9 trotted off after getting shot and was taken to a nearby emergency center for immediate treatment.

Riggs recovered fully from the gunshot wound and was welcomed home from the vet’s office in Illinois with a procession over the weekend. People, officers and other K9s lined the way for the pup to make his way to his favorite park.

“He’s family, he’s always been,” officer Tifft said. “He’s a sweet dog, but he did his job and he saved my life.”

As a flyover saluted both Tifft and Riggs, the crowd heard the story of their heroic arrest.

Now, they both are taking some time off from police work after the near-death encounter. And while Tifft would love to keep working with Riggs when he returns to duty, he says that his beloved K9 is entitled to retirement at this point.

Tifft and Riggs’ welcome home will bring you to real tears, and it is just another reminder that dogs are really a man’s best friend. Great job, Riggs.

We are all proud of you!