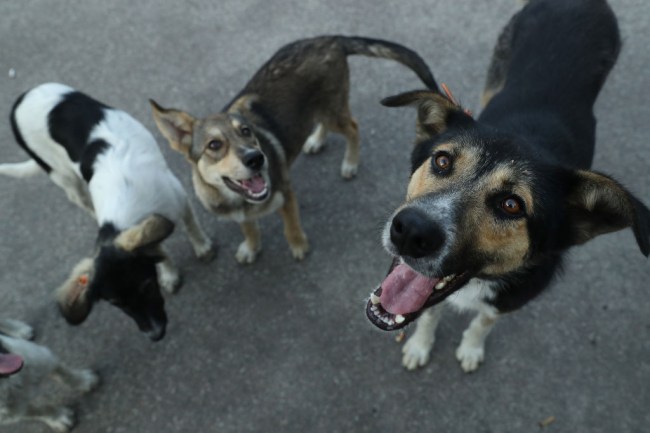 A dog rescuer in the Bahamas has sheltered nearly 100 dogs to protect them from the devastation of Hurricane Dorian. While the woman admits that the rescue attempt has been difficult at times, the effort was rewarding in the end.

Hurricane Dorian has reportedly destroyed at least 13,000 houses, 15 people are missing on the Caribbean island and five people have died as a result of the once Category 5 hurricane. Dorian has absolutely pummeled the Bahamas as it refuses to leave, sometimes moving at 1 mph or even stationary, pounding the region with tornado-strength winds without leaving.

One woman in the Bahamas wants to help the dogs on the defenseless Caribbean island who can’t help themselves. Chella Phillips has rescued early 100 stray dogs in an effort to keep them safe as Hurricane Dorian ravages the Bahamas.

Chella Phillips runs The Voiceless Dogs of Nassau rescue operation but opened the doors of her own home once Hurricane Dorian hit the Bahamas. She brought in 97 dogs into her own house to protect them from the devastating forces of Hurricane Dorian.

“97 dogs are inside my house and 79 of them are inside my master bedroom,” Phillips wrote in a Facebook post on Monday. “It has been insane since last night, poop and piss non stop but at least they are respecting my bed and nobody has dared to jump in.” The heart-wrenching Facebook post has gone viral with over 61,000 Likes and more than 42,000 shares.

“Each island has an abundance of homeless dogs, my heart is so broken for the ones without a place to hide a CAT 5 monster and only God can protect them now,” she wrote. Philips said that her home lost power and some water has begun leaking into her house.

Phillips said that the rescue operation has saved a total of about 1,000 dogs since it started four years ago.

“The dogs get vetted, vaccinated and from there they come to live at my refuge until I am able to find a rescue willing to help me with them in the States,” The Voiceless Dogs of Nassau Facebook page says. “Countless homeless dogs have left the streets of Nassau and they are now enjoying life being loved and cared [for] by their families.”

The Voiceless Dogs of Nassau is not a nonprofit that works to send dogs from the Bahamas to adoption and rescue agencies in the United States.