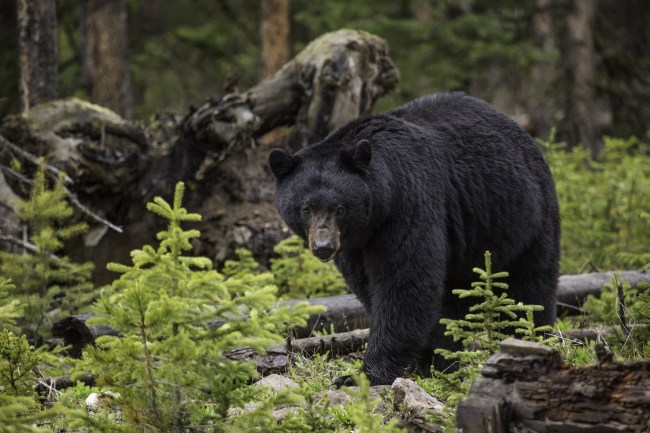 A woman from Manitoba was out running on Moon Lake Trail in Riding Mountain National Park when she found herself face to face with a startled black bear.

She was hiking a steep hill with her four dogs when the next thing she knew the bear was taking a sipe at her face and she could feel blood running down her face, body, and legs. Not to be lost in this is how that bear somehow didn’t hear FOUR DOGS coming. In an Instagram post, she said she was hiking/running with headphones on to ‘drown out the sound of the bugs’ in the area but how the bear didn’t hear four dogs approaching and take off is pretty wild to me.

It sounds as if the bear was just as spooked to see her as she was to see the bear but only one of them reacted by throwing hands. The pictures shared on her Instagram show how painful the initial injury looks and how much blood there must’ve been after the bear struck her across the face with its paw.

Here’s her story of how it all went down:

About 4.5 kms in, as I was running up a steep hill, a black bear suddenly came out of the bush onto the trail, about a foot in front of me. The bear was very clearly spooked, as it must not of heard us coming. Instinctively, the bear reacted in fear, striking me in the face with its paw and then again on the back. Everything happened so quickly, my dogs, (who are all okay and unharmed) had just passed the spot where the bear emerged, did not even know what was happening.
As soon as I was hit by it’s paw, the bear took off. It was not an aggressive bear and didn’t want to pursue attacking me, it was simply as shocked as I was when we spooked it and reacted in fear.
I was obviously scared afterwards, because all I could see was the blood pouring off my face onto the rest of my body, not knowing how bad the cut was freaked me out.
I called my brother who calmed me down, and then my mom, who stayed on the phone with me for about 40 minutes as I hiked the last 5 kms back to my car, where my boyfriend met me and drove me to the hospital.
The doctors decided not to stitch my face up due to the cut being made by an animal claw, to watch for signs of infection they used skin strips instead.
I am okay, all I will have to deal with going forward is a deadly scar across my face. I am so thankful that I didn’t lose my eye or my life yesterday.
Thank you all again for the love and support you have shown me. From now on I think I’ll be wearing bear bells when I run/hike in the park

Here are her battle wounds from the encounter:

In her caption, she thanks everyone that reached out to her and says she wanted to put the entire story into one post. She says she frequently runs that trail with her dogs, all four of them, and she was on a 10km trail which she hikes every other day.

According to the CBC, encounters with bears in the area have been on the rise due to restrictions on group sizes and recent changes to combat congestion from hikers and runner.

Here’s to hoping that this was a once-in-a-lifetime encounter and next time her four dogs will do a better job of alerting any bears in the area to GFTO before something like this ever happens again.