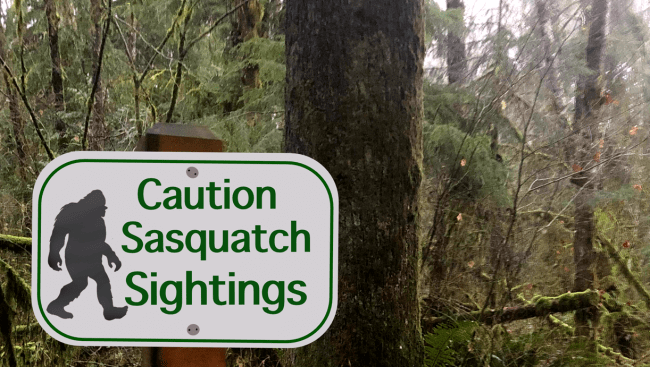 Back in the early 1980s, Jacqueline Lange worked as a farmhand on a ranch in Manitoba, Canada. It was there that she says she and other workers on the ranch had a terrifying encounter with what they believe was Bigfoot.

“I worked on a horse farm in Manitoba and on this one winter night I went to the oat shed when I heard a wham against the back wall,” Lange told the Mirror. “It scared the sh-t out of me, I left the shed and expected to see the geldings but there weren’t any.

“I then heard shuffling next to me in the shadows behind the shed. I backed up until I could see a head and shoulders taller than the line of the shed. It looked one way, then the other and turned back staring at me.”

Lange says at that point the creature growled a rumbling growl at her, causing her to run and go get help to protect the geldings.

“We both ran back with pitchforks and it was still there, it again looked one way the other and came back looking at us and growled again. We were screaming at it and it leaned and jumped into the paddock and ran off.”

Manitoba, Canada is one of the many hot spots in North America for Bigfoot sightings

Later, at around three o’clock in the morning, she says police showed up to let them know that some of the horses had escaped by running through a wire fence, taking out a post as they fled.

Related: Man Claims To Have Had Terrifying Encounter With Bigfoot While Snowboarding In The Rockies

The next day the local newspaper ran a story about a police officer who claimed to have seen a “tall hairy thing which jumped across a ten foot fence” the night before.

Looking back, Lange says, “A few things started making sense like the oats having to be ordered two weeks earlier then normal, the nest made in the straw bales under the blue tarp out back and the morning when turning the mares out, they usually beelined for the door but this particular morning they ran in circles just beyond the door and came bolting back into the barn.”

“They do exist in Manitoba, they are more likely to approach farms in winter, especially where there is livestock and will pilfer the food for the livestock if they are desperately hungry,” he told the Mirror. “They really like oats. If they rifle through a backpacker’s stash and find a bag of oatmeal they’ll abscond with that bag and leave the rest. Whereas a bear will tend to eat everything. In the depths of winter they will sometimes enter barns and make nests in hay piles. That happens in the U.S. too.”