Woman Stung By An MFing Scorpion On An MFing Plane 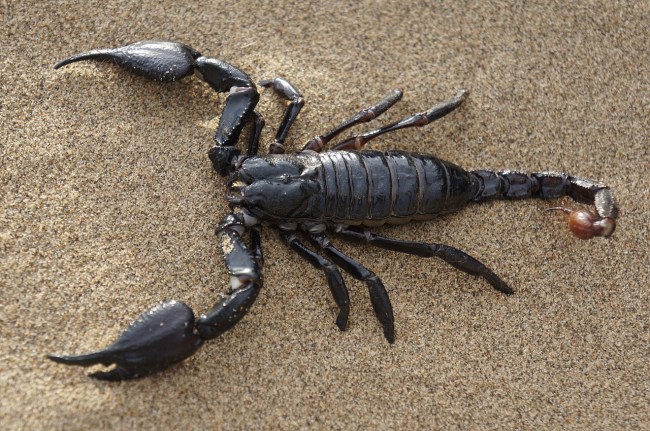 We take you to Canada where this travel nightmare took place. On February 26th, a woman was on an Air Transat flight from Toronto to Calgary. That’s when the frightening encounter with the predatory arachnid on a plane.

In the last hour of the four-hour flight, student Quin Maltais “started to feel a fluttering motion on her lower back.” She ignored it because she simply thought it was the air conditioning blowing down her back. She was wrong. Very wrong.

“As soon as the lights turned off again, closer to when we’re literally about to land, I felt the piercing pain on my lower back, like, oh, my God, something bit me,” Quin told the CBC.

Maltais asked a flight attendant for help and they said there was nothing there except for a gum wrapper. The flight attendant told her she didn’t get stung by a scorpion, but it was the gum wrapper that gave her excruciating pain. That’s when Quin spotted the scorpion between the seats.

“The lights turned on, I looked into the ball of bundled sweater that I had but nothing was there,” Quin said. “I looked behind me on the seat and then I saw movement and there was a scorpion that was in the fold toward the back of the chair.”

“There was a scorpion in my sweater. It was on my back for the past 30 minutes … it was like four inches, maybe,” she said, adding that she wondered “what is that doing on a Canadian flight.”

Paramedics had to be escorted off the plane. “I had a full-fledged panic attack … paramedics had to kind of keep me strapped to a heart monitor for a while cause I was just unable to calm down,” she said.

It was only a month ago, that there was a scorpion on an Air Lion flight.