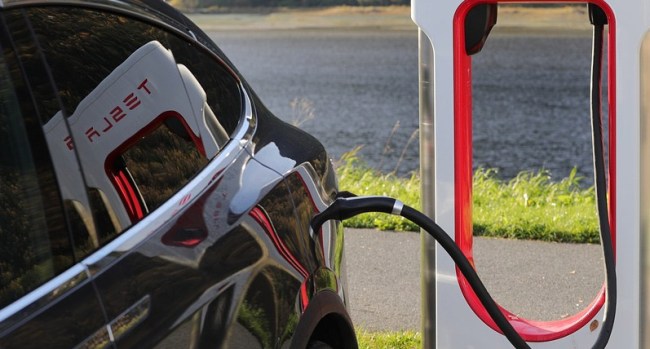 While I am 100 percent sure that this woman is not the first person to ever pull into a gas station and attempt to fill their electric car with gas, she does happen to be the first person I have ever seen actually do it.

In the video, which has gone viral for obvious reasons, a woman who was driving a Tesla Model S (and obviously does not do so on a regular basis), is seen searching for where to put the gas nozzle on the outside of the car, looking in the trunk, checking the inside for… something, and using her phone to try to figure out how to put gasoline in the car. All while the two guys watching and filming crack the hell up before finally clueing her in as to what the problem is – something she seemed to find almost as amusing as they did.

Naturally, when the video hit the internet, the reactions to her mishap were almost as funny as the video itself.

“I dont wanna live on this planet anymore…﻿”

“Absolutely made my day. Best thing is that in the end she still looks as if she didn’t quite understood what the guy told her and what she had to do﻿.”

“I’m glad she laughed it off and moved on. She either rented the car without knowing it was Tesla/didn’t know Tesla runs on electric or its her family’s car.﻿”

“Maybe it’s not her car. She’d have thought it was a hybrid car. There’s also the chance she’d a tough day. Who knows…﻿﻿”

“So you prefer to laugh for few minutes, instead of making her aware that she did a mistake and teach her how to actually use the car? She could have received it as a gift. Stupid or not, you could have helped faster 🙂 This is why our world is divided. People prefer to laugh at others, instead of showing them how it is done. If she were to have an accident, you had all the right to laugh at her. She is just not used with this type of car. I once got an Uber that was electric, and could not find the handle. But it was differently placed than what I am used to in my day to day life. But I learned and the lady did not laugh at me. I did laugh at myself though﻿.”

Holy crap. How can this person even have a Tesla? https://t.co/JSmhNwBXJb

@elonmusk @Tesla this is what happens when you take the car to your husband/partner and you do not know what you are driving …… #facepalm https://t.co/o1cjMkiGlO

You should spread some awareness. @elonmuskhttps://t.co/VaybJHtAgY

But its background laughter that got me 😂