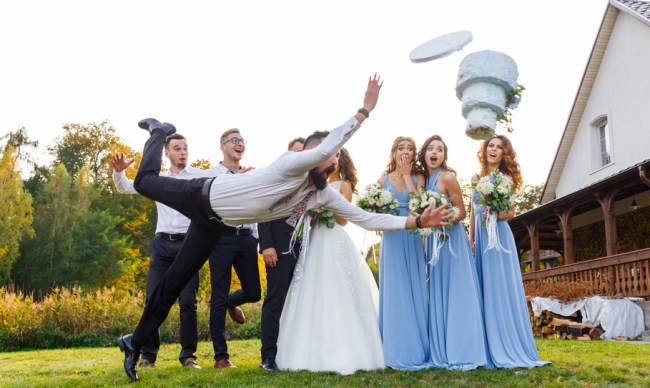 Let’s face it, weddings are almost always boring. So despite the fact that these are the WORST things people say they ever saw at a wedding at least they were entertained.

In fact, I would go so far as to say, in some of these cases, what happened, at least to me, would have been one of the GREATEST things I have ever seen at a wedding.

See if you don’t agree with me here…

At a cousin’s wedding my uncle was smashed and thought he’d had a stroke in the bathroom as he couldn’t straighten himself. Turned out he’d buttoned his waistcoat to his trousers and couldn’t stand up. ~ Bo_Shuda

The bride’s mother stood up during the ceremony and began screaming that the bride was a lying whore who never loved her mother. ~ InsectGuru

I worked weddings for a living and once saw the best man get loaded, give a speech, and profess his love of the bride and how they had slept together two nights before. Open bar: 1, best man: 0. ~ cjbeck71081

Friends’ wedding a few years ago. The DJ had screens up for slideshows of the bride and groom that were played during some of the songs. Fine. DJ’s screensaver was Girls Gone Wild style videos. We saw lots of tits on those screens. ~ anotherrachel

Brother and sister-in-law thought it would be fun to have their dogs walked down the aisle after their flower girl spread the flower petals. The dogs thought mid-way down the aisle was the perfect place for a shitting photo-op on the white runner. ~ Vealophile

My favorite is probably the one where the entire wedding party started drinking at noon for a 6pm wedding. The groom passed out around 5 and we couldn’t get him up. So I made him a a ham sandwich and propped him up in his bed while I handfed him.

Managed to get him and his boys down to the courtyard and then had to run back in and herd the women down. The bride spilled her mimosa all over her dress, two of the bridesmaids couldn’t find their shoes, but everyone was super happy and nice.

There were about 150 people at the reception and every single one of them got absolutely hammered. The mother of the bride kept sneaking up on me hugging me and the groom made me pose for some photos with them. They also gave me all the leftover wedding cake and a few bottles of wine. I miss them. ~ irespectwoodlarry

During the “Man of Honor” speech, the guy repeatedly said the name of the bride’s ex instead of her new husband. Three times. “When I first saw [Bride] and [Bride’s ex], I knew they were perfect for each other”. Stuff like that. And he caught himself, too, every time. He was insanely embarrassed… but he still did it three times throughout the speech.

It was so awkward watching it happen… probably the biggest social trainwreck I’ve ever seen. ~ SparkyBoy414

My friend got married around age 21. Neither he nor the bride had much money, so the wedding was modest but still very nice. They did have a lovely 3 tier cake though.

The ceremony goes fine and “The bride will cut the cake” music is playing. She was a dainty, tiny little thing, maybe 5’2″ and 100 pounds soaking wet. If she swatted a fly it might not even notice. She approaches the cake with the knife, barely touches it and BOOM! the whole thing immediately collapses, all three tiers somehow, all over someone’s elderly grandmother who was seated right by the ill-fated cake.

That old lady, who had barely moved throughout the whole affair, shot out of her chair like she was fired from a cannon, screeching bloody goddamned murder and sending cake shrapnel all over those nearby. Another close friend and I watched the whole thing from close range and were paralyzed and purple from hysterical breathless laughter, as were many of the other guests. ~ Yerkin_Megherkin

At the reception, the bride received a tip to go out to the parking lot where she found her new husband making out with his ex gf. The ensuing fight came inside the hall and the party screeched to a halt. Both families were displeased and stuck him with ALOT of bills. We kept our gift. ~ onejoke_username

At my own wedding reception, I saw my wife’s grandma, who was about 98, very slowly and with a terrible sense of inevitability fall sideways off her chair. She remained in a sitting position but just slooowly tilted sideways til she was on the floor, still in the exact same pose.

Luckily she was fine, and lived for another few years to see her 100th birthday. ~ mushinnoshit

Bride’s step-mother and mother got into a fight. Step-mother bit the mother. Wedding went to a screeching halt. ~ PM-ME-ELEPHANT-JOKES

When the groom broke down and admitted to everyone that he was actually gay. While at the altar. That was pretty fucking entertaining. The bride quite literally vomited from the stress, people went mental. I saw a fat kid eating a slice under the cake table. Children screaming, dogs barking, and a priest trying to calm everyone down. Like a fucking comedy movie. ~ maybietko232

Was at a wedding this summer. The groom’s family absolutely tore their son/brother apart during the speeches. They didn’t say one loving thing, and went on to talk about all the mistakes he made during this life. The worst thing they brought up was how he was responsible for a car accident that put someone in a coma. I was cringing. ~ haveagreatsummerHAGS

I was an attendant in my best friend’s wedding. Her father walked her down the aisle and while he was not visibly drunk, he had a hard time walking behind her to sit in the pew. He stepped on her dress ripping it from her back down to her ass (her thong was red). They had to stop the wedding so that she could find safety pins. ~ 3Suze

Nervous groom stood with his legs straight for too long. Fell forward and knocked himself out cold hitting the first step to the platform with his head. ~ keilwerth

I wish I could have attended ALL OF THESE weddings.

Check out the rest of the wedding horror stories, or as I like to call them, “awesome” stories, over at Reddit.