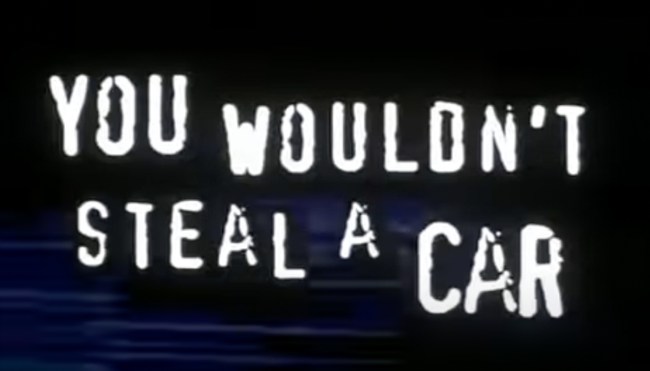 If you went to a movie theater or watched a DVD in the mid-2000s, you’re likely intimately familiar with the PSA that was whipped up by the MPAA and an anti-piracy organization in an attempt to dissuade people from illegally downloading movies online.

The spot in question harnessed guilt as its primary weapon while attempting to establish a moral equivalency between movie piracy and other illegal acts, with the former essentially positioned as a gateway crime that allegedly shares parallels with the theft of some more tangible (and expensive) items—including the one referenced in the infinitely memed title card that reads “You Wouldn’t Steal A Car.”

People have spent decades debating the fairly murky ethics of piracy, and while there are valid arguments on both sides, I think any reasonable person would agree that comparing the “theft” of a digital file to the robbery of a motor vehicle is a patently absurd analogy.

As a result, the PSA was widely considered a failure. However, according to IFL Science, it may have inadvertently done much more harm than good based on research that was recently released more than 15 years after it debuted.

That claim is based on the results of a study that was recently published in The Information Society that examined the impact of various anti-piracy campaigns.

The duo behind the analysis suggests the aforementioned ad and others played a role in increasing piracy by simply existing; the potential benefits of shaming the behavior were likely canceled out by bringing it to the attention of people who may have not even been aware downloading movies was an option until seeing the warnings:

“The most striking example might be the (in)famous ‘You would not steal a car’ awareness video aired in cinemas and on DVDs worldwide during the 2000s. It compared downloading a movie to various forms of stealing, including reasonably relevant ones (stealing a DVD in a store) and somewhat absurd others (stealing handbags, TVs, cars), which diluted down the message…

Informing directly or indirectly individuals that many people pirate is counterproductive and encourages piracy by driving the targeted individuals to behave similarly.”

This is just more proof the road to hell is paved with good intentions.